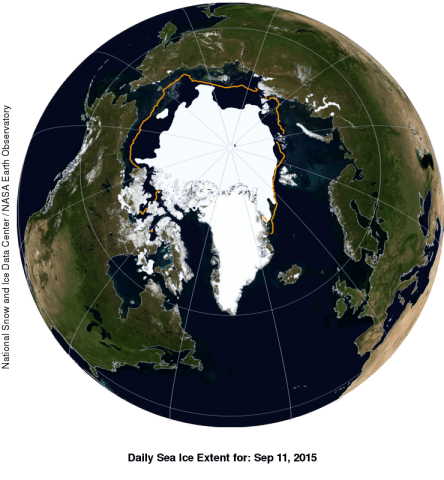 On September 11, 2015, Arctic sea ice extent dropped to 4.41 million square kilometers (1.70 million square miles), the fourth lowest minimum in the satellite record. This appears to be the lowest extent of the year. In response to the setting sun and falling temperatures, ice extent will now climb through autumn and winter. However, a shift in wind patterns or a period of late season melt could still push the ice extent lower.

The minimum extent was reached four days earlier than the 1981 to 2010 average minimum date of September 15. The extent ranked behind 2012 (lowest), 2007 (second lowest), and 2011 (third lowest). Moreover, the nine lowest extents in the satellite era have all occurred in the last nine years.

Both the Northern Sea Route, along the coast of Russia, and Roald Amundsen’s route through the Northwest Passage are open. How long they remain open depends on weather patterns and the amount of heat still present in the ocean mixed layer (about the top 50 feet of the ocean). The deeper and wider Northwest Passage route through Parry Channel, which consists of M’Clure Strait, Barrow Strait, and Lancaster Sound, still has some ice in it.

Commenting on the news that the Arctic sea ice has reached its annual minimum extent for 2015 and is the fourth lowest extent on record, Greenpeace International Spokesperson Ben Ayliffe said: “2015 is the hottest year ever recorded and the Arctic is vanishing before our eyes. This ought to be a stark warning, but for the likes of Shell, which is now drilling in Alaska’s Chukchi Sea, it’s a chance to head north to look for more of the oil that has caused the sea ice to melt in the first place.

“We don’t need any more satellite images of shrinking sea ice to tell us that urgent action is needed to protect the far north. It’s time for governments, business and people the world over to respond and the most obvious place to start is by calling a halt to Shell’s reckless search for Arctic oil. We’re never going to find the solutions to the melting Arctic at the bottom of an Alaskan oil well.”
Related Topics:Arctic oilArctic sea iceBarrow StraitGreenpeace Internationalhottest year ever recordedLancaster SoundM’Clure Straitnorthern sea routeParry ChannelShell