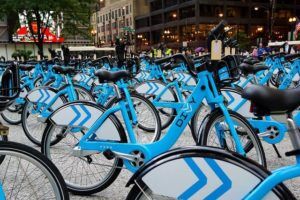 Bike sharing programs have cropped up all over Europe and the United States, especially in major metropolitan areas. Both tourists and members of the local workforce have benefited from the presence of these new programs – but there are a few hidden costs that potential users should know about before they buy in.

Breaking Down the Maths

The idea is the more people who hop on a bicycle – such as one of NYC’s bright blue CitiBikes – the less use they’ll have for cars. But the numbers are a little more complicated. How much carbon dioxide does bike sharing keep out of the atmosphere overall?

It’s hard to measure, especially in a city like New York, where most residents rely on the local public transit system. If bike sharing leads to more people using mass transit and then renting a bike to get to and from work, instead of driving a car, that’s a definite benefit – but it’s virtually impossible to define a concrete metric.

Furthermore, these numbers differ across cities, depending on how many residents already forgo car travel. In London, for example, the local bike share program has actually increased the number of automobile miles driven per year. Partly to blame may be the fact that large trucks are required to transport bikes between docking stations.

London seems to be an outlier, however. Minnesota, Washington DC, and Melbourne all saw significant car travel reduction with their bike share programs – and unlike London, the added miles for fleet rebalancing and support didn’t make up for it.

Pros and Cons of Bike Shares

Bike shares are becoming more and more mainstream, but depending on where you live and your transit needs, a bike share program might not be right for you. Consider the pros and cons as you decide whether to participate

– This could be a pro or a con, depending on how much you want (or don’t want) to stand out from the crowd. Owning a bike outright means you have the option to customize it with great gifts and products – which won’t work if you’re using a branded urban bike.

– Depending on how much mileage you put in and how much time you spend cycling in any given day, owning your own bike might be more affordable – even with the maintenance involved. Most bike share programs charge by the hour or half hour, so if you need your rental for a longer period of time, the cost can spike rapidly.

– Owning a bike requires a fair bit of elbow grease in order to keep it running in tiptop shape. On the other hand, a bike share bicycle won’t require any maintenance on your part. If you notice an issue, all you need to do is alert the company, and they’ll take care of it.

– Bike share bicycles are built for city safety, with wide tires and a sturdy frame that will help you brave even the worst street conditions. Additionally, bike share programs take the responsibility of securing your bike out of your hands. As long as you dock it properly in its high-security station, you won’t have to worry about theft. With your own bike, even the highest security locks aren’t infallible.

Whether or not bike sharing is for you, one thing is for certain: these programs are fantastic for garnering support for cyclists everywhere. As more and more people use cycling as their way to get from point A to point B, cycling infrastructure such as bike lanes and clearer traffic rules will gain footing. Ultimately, this will lead to more people getting out of their cars and hitting the streets on two wheels.