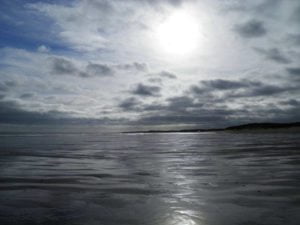 Yesterday Bill Oddie joined activists in Northumberland protesting an opencast coal mine. The naturalist and broadcaster attended a beach party and picnic where protestors rallied against proposals for a huge opencast coal mine near Newcastle. Banks Mining, part of the Banks Group, has put forward the proposal.

The event, organised by Save Druridge and supported by Friends of the Earth and other groups, is being held to celebrate Druridge Bay, which is under threat from plans for a huge opencast coal mine that will cause massive environmental destruction next to one of Northumberland’s most beautiful and loved beaches.

The proposal, by Banks Mining, would see up to three million tonnes of coal excavated by 2023 on a site spreading across a square mile of land.

National and local campaigners are opposing the development because the opencast mine would scar the landscape, affect habitats and bird life in the area, impact on tourism and lead to more climate-changing carbon emissions.

Bill Oddie, Naturalist and broadcaster, said: “When I heard that there was a threat of opencast mining in Druridge Bay I honestly thought it had to be a rather sick April Fool’s Day prank. Heaven knows, we are used enough to having to combat new developments, but this is a grotesque step back to the bad old days. It is a matter of history that opencast mining was responsible for the major desecration of this part of Northumberland.

“It was a glorious step forward when the mining ceased and wonderfully successful regeneration began to take place. For years it has flourished.

“I myself have had tremendous pleasure enjoying the rich wildlife and imaginative management of Druridge Bay, Cresswell, Hauxley and other areas which combine to form one the finest wild areas in Britain. It is a tribute to what can be done. It must not become a monument to desecration. That opencast mining could once again be the Nemesis is simply staggeringly ironic.”

Local resident and Save Druridge member Lynne Tate said: “Northumberland were given a Silver Award last year in British Tourism, just missing out to Cornwall for Gold. This shows how much tourism has grown in our county.

“The proposed opencast mine will not only cause devastation in the form of pollution from dust, fumes, traffic, noise and wildlife displacement, but could also harm our tourism industry, which is growing year upon year and hugely boosting employment.

“Many people would bypass Druridge Bay if an opencast mine were allowed. It doesn’t make economic sense to give planning to a company which has just mothballed a mine at Rusha in Scotland three years early. We hope the planning committee sees sense and throws this application onto the scrapheap where it belongs.”

Friends of the Earth campaigner Guy Shrubsole, who spoke at the event, said: “Digging an opencast coal mine at Druridge Bay would desecrate the local landscape, be a tragedy for the region’s tourism and a disaster for the climate.

“It’s clear that the balance of public opinion in Northumberland is firmly opposed to the mine. It’s time to leave fossil fuels in the ground. Northumberland councillors should be in no doubt that this is also a decision of national significance and will echo for years to come – they can and must reject this mine.”