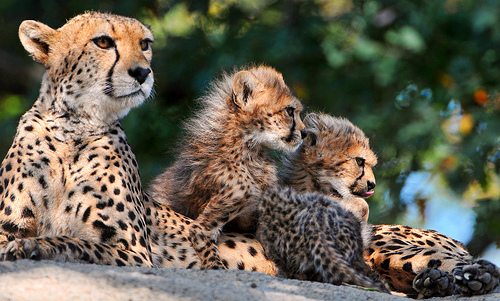 Up to two thirds of cheetah cubs are being smuggled through Africa to be sold as luxury pets in the Middle East, putting the species at risk of extinction, a new report has found.

The report, compiled for the Convention on the Trade in Endangered Species (Cites), said that the big cat is becoming increasingly popular as a status-symbol pet in Gulf States, such as Saudi Arabia and Yemen, being bought for up to $10,000 (£6,000).

Cheetahs have been tamed for years in Africa to be used as royal hunting animals, but international trade and habitat lost to farmland has caused a 90% population decline over the last century.

As cubs are relatively easy to tame, they are trapped in the East and Southern Africa and then shipped to the Middle East, where it is not rare to see them walking on the lead or living in households.

The report explains, “The primary destination of live cheetahs from this region, based on multiple confirmations and lines of evidence, are the Gulf States, and the primary means of transport is by boat out of the Somali regions, to the coast of Yemen, and across Yemeni borders by vehicle.”

It adds that the animals have low survival rates when kept in captivity and they often manage to escape.

“The keeping of big cats in residential areas across the Arabian Peninsula poses serious environmental and safety risks, both to people as well as the cats,” it adds.

Conservationists fear that the phenomenon would affect the already fragile population of wild cheetahs and called for law enforcement at borders in the Gulf States and in Africa to tackle illegal trade, while monitoring allowed captivity.

Nick Mitchell, one of the authors of the report, said, “This whole trade had not been appreciated by the public or by the conservation world. If we do not act now on the trade and land-use change, then we can be certainly losing sub-populations in a few years.”

Royals host cricket game to speak out against wildlife trade