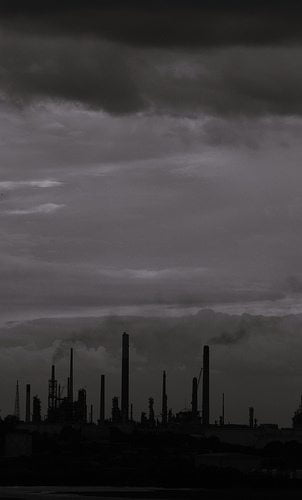 A dangerous air pollution episode is expected to hit many parts of the central belt tomorrow (17/3/16), peaking on Friday 18th, with some areas still affected on Saturday 19th. Toxic levels of Particulate Matter are expected to smash World Health Organisation and Scottish Regulatory safety standards in fifteen Council areas in Scotland.

Emilia Hanna, Air Pollution Campaigner for Friends of the Earth Scotland said: “Air pollution is expected to blow in from the East and combine with the heavy air pollution pouring out of car and lorry exhausts on our streets. The weather is expected to be still and calm on Friday, which means that the air pollution will have nowhere to go, creating dangerous conditions with our air much more damaging than usual. People with lung or heart problems and older people will be especially vulnerable to this toxic stew.

“The expected pollution levels will be exceptionally high and in some places will be potentially dangerous for people who are otherwise healthy as well as at-risk individuals.”

Hanna continued,
“The official health advice for Clackmannanshire, East Dunbartonshire, Falkirk, Fife, Glasgow, North Lanarkshire, South Lanarkshire, and Stirling on Friday is that adults and children with lung problems, and adults with heart problems, should reduce strenuous physical exertion, particularly outdoors, and if they experience symptoms. Asthma sufferers should make sure they are carrying their inhalers as they may need to use them more often. Older people should also reduce physical exertion. Anyone experiencing discomfort such as sore eyes, cough or sore throat should consider reducing activity, particularly outdoors.

Friends of the Earth are calling on the Government to take concerted action to tackle this episode and Scotland’s air pollution problem. Emilia Hanna concluded,

“To tackle the worst of tomorrow and Friday’s dangerous pollution impacts, the Government should advise people to avoid driving and adding to the problem. In the longer term, it must introduce measures to reduce traffic levels on our streets. Toxic air pollution episodes like this show that the Scottish Government is not doing enough to address the public health crisis of our dirty air. This kind of air pollution causes over 2000 early deaths each year and costs the Scottish economy over £1.1 billion.

“The next Scottish Government needs to bring in measures to discourage people from using their car such as parking levies on large destinations like supermarkets, congestion charging and city-wide 20mph zones. It should commit to bringing in Low Emission Zones in key cities by 2018, so that the most polluting vehicles are kept out of our city centres. By investing 10% of its transport budget on walking and cycling it would give sustainable transport a chance to really thrive in Scotland.