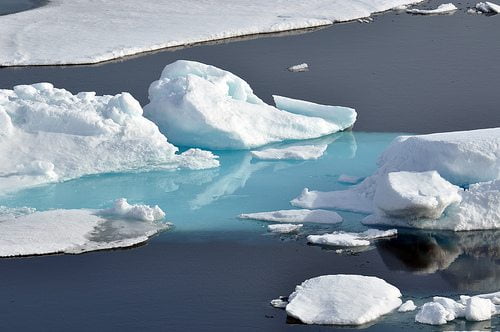 A new study has suggested that Arctic ice reflects less sun heat back into the atmosphere because of an increase in melted sea ice and that this is causing the Earth to warm rapidly.

The Arctic is less bright than what it used to be, because kilometres of ice have melted. This means that the solar radiation is reflected back into the atmosphere less, because ocean water is darker than ice, reflecting less heat.

Scientists have linked this phenomenon to a greater warming on the Earth’s surface, as less heat is sent back into the atmosphere.

The study, which will be published in the Proceedings of the National Academy of Sciences, has revealed that the Arctic albedo – the amount of solar radiations that a surface reflects back to space – has decreased from 52% to 48%, double what was previously thought based on climate models.

“Although more work is needed, a possible implication of this is that the amplifying feedback of Arctic sea ice retreat on global warming is larger than has been previously expected”, co-author Ian Eisenman from the Scripps Institute of Oceanography told Live Science magazine.

“There are a lot of questions right now as to why the ice is retreating as fast as it is, and why it has the structure that it has is a little hard to say”, he added.

“The cause and effects get subtle — ocean currents respond to sea ice and sea ice responds to currents.”

According to the researchers, the heat deriving from this phenomenon would account for 25% of total global warming. Recent satellite measurements revealed that melted Arctic sea ice increased by 50% in 2013 compared to 2012. However, scientists warned that the ice loss in the Arctic is still a major problem and that the region might become ice-free within few decades.