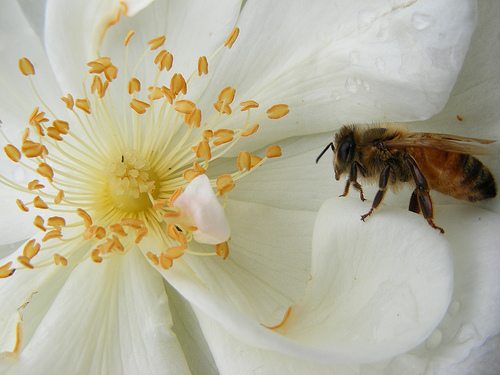 Friends of the Earth have said that it is time for the Government to “get off the fence” over whether it supports the continuation of the current Europe-wide restrictions on three neonicotinoid pesticides which mark their 2nd anniversary today.

The environmental group says that the science on the threat they pose to bees and other wildlife is stronger than ever and that predictions by opponents of the restrictions that there would be devastating and widespread crop losses in their absence have proved unfounded. Views from a retailer, an academic and a farmer support the continuation of the ban.

Waitrose Head of Sustainability, Quentin Clark, said: “In 2013 Waitrose prohibited the use of the three restricted neonicotinoids in our own supply chain ahead of the EU ban. This was a two year project in which we have made significant progress. We are aware of the current reviews but have no plans to change our commitment to full removal on crops that are attractive to bees.

“Oil seed rape production at our own farm at Leckford has not suffered as a result of the restrictions and we’ve continued to press high quality rapeseed oil for sale to our customers. As a business dependent on a consistent supply of quality foods pollinated by bees and other insects we support the continuation of the ban to protect these vital pollinators.”

Bee neuroscientist, Dr Christopher Connolly of University of Dundee said: “For the past four years I have been involved in research that demonstrates clear negative effects of imidacloprid and thiamathoxam on bumblebees and honeybees.

“Based on our findings, different insect species are likely to respond in different ways, so it is not possible to predict which beneficial species are at greatest risk from neonicotinoids.

“To date, there is no existing evidence to warrant a lifting of the moratorium.”

Peter Lundgren, a Lincolnshire farmer said: “Since the ban on neonics I have continued to produce oilseed rape at no or very little additional cost.  The current restrictions were the right response to the evidence of harm.  Farmers rely on bees for yield and quality – we need to protect them, and other pollinators, to protect the financial viability of our farms and our ability to address the challenge of ensuring national food security.

“What I need from the Government is an investment in research and development of alternatives that are going to protect my crops without harming the bees and other beneficial insects that we depend upon”.

Concluding, Friends of the Earth Bees campaigner Sandra Bell said: “Since restrictions on neonicotinoid insecticides were introduced two years ago the evidence that they harm bees, and other wildlife such as butterflies, has continued to stack up. Frighteningly these chemicals are also turning up in wildflowers planted next to arable crops so bees are getting exposed more than previously thought.

“It’s time for the Government to get off the fence and back a permanent ban on all neonicotinoids, on all crops. It should help farmers get off the chemical treadmill by developing and promoting non-chemical pest control that’s better for bees”.