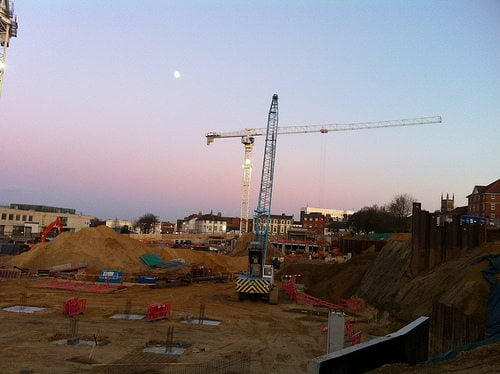 The green movement has swept the United States, influencing everything from the clothing we wear to the food we eat to the cars we drive. In recent years, it’s also played a significant role in the design and construction of buildings. Contractors around the country have begun to develop a standard for construction that revolves around using renewable resources, conserving energy, and relying on sustainable materials. It’s become very popular, and a recent study shows that this style of construction plays a hefty role in driving the economy in the United States.

According to the study, which was performed by the U.S. Green Building Council (USGBC), adoption of this construction method is currently the most popular and growing quickly. The green building sector is taking the lead in overall construction numbers in the United States, since this sector alone contributes more than $134.3 billion in labor for the working class.

It’s predicted that by 2018, the industry will have grown so much that it will supply a whopping 3.3 million jobs for United States citizens, which will account for more than one-third of all jobs in the United States building and construction industry, with more than $190 billion awarded in labor earnings. Because of its contribution, the industry is expected to directly contribute $303.5 billion to the U.S. Gross Domestic Product (GDP) between 2015 and 2018.

In addition to the labor earning benefits, the study has projected a change in taxes as well. According to the official report, “The study projects significant growth in green building’s contribution to individual states’ tax contributions and environmental asset indicators at both the state and national levels.” Taxes for American citizens will begin to decrease in this area, successfully increasing the feeling of wealth among citizens.

“Our research shows that green building has created millions of jobs and contributed hundreds of billions of dollars to the U.S. economy, with the construction of LEED-certified buildings accounting for about 40 percent of green construction’s overall contribution to GDP in 2015,” said David Erne, a major contributor to the study. “This industry is certainly on the rise, and aggressive growth in the green building sector is anticipated over the next four years.”

Based on the findings of this study and Erne’s assessment, it’s clear that the green sector has, and will continue to have, a profound impact on the American economy.

The Reasons Behind the Drivers

As the results of the study clearly point out, the green sector of construction is obviously good for the economy. So, why it’s such a powerful motivator? Rick Fedrizzi, CEO and founding chair of USGBC stated, “Green building is playing a massive role in the U.S. construction sector, the clean and efficient energy sector and the U.S. economy as a whole … Demand for green building will only continue to grow as individuals, businesses and institutions continue to prioritize sustainable approaches to the design, construction and operations of our built environment.”

Fedrizzi’s statement identifies the primary reason for the growth in the green construction industry. Because businesses, individuals, political parties, and other organizations are beginning to recognize the impact of their lifestyles on the environment, it’s calling for direct action to prevent and slow its effects. Green building is now considered a business imperative, and individuals are beginning to take a greater interest in the world around them. As a result, environmentally-friendly businesses are taking the lead in their designated industries. As identified previously by Erne, this is a trend that’s not likely to go anywhere within the next few decades.