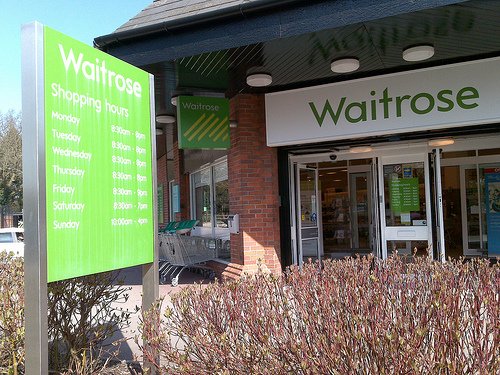 Greenpeace calls for action over Waitrose’s ‘toxic partnership’ with Shell

Environmental campaign group Greenpeace has secured over 30,000 signatures in a petition for supermarket chain Waitrose to drop its affiliation with oil giant Shell.

Waitrose announced earlier this year that it would be opening stores at Shell petrol stations across the UK, and Greenpeace has urged individuals to sign a letter addressed to managing director Mark Price that demands the shop “breaks off its current partnership” with the oil firm.

“A spill or accident in these icy waters would be disastrous and the conditions in the Arctic would make responding to such a disaster almost impossible.

“Waitrose is a values-based organisation with a commitment to ethical sourcing and sustainability. I am both surprised and disappointed that Waitrose is currently working with Shell.”

As well as urging people to add their names to the petition, Greenpeace groups have been campaigning outside a number of Waitrose branches in the UK. It has also dubbed alternative commentary over a television advert made by the supermarket that features celebrity chefs Delia Smith and Heston Blumenthal.

In a statement published last week, Waitrose claimed that its corporate affiliation with Shell was on a relatively insignificant scale, adding that it was not unusual for a supermarket to have relationships with major oil companies.

“We put as much thought and careful consideration into our relationships with other businesses as into everything we do. Having said that, in the context of Shell worldwide, the arrangement we have with them is small”, a spokesperson said.

“Unlike our supermarket competitors, who have substantial petrol operations, Waitrose has chosen to get out of the fuel business.

“The scale of our involvement with Shell amounts simply to their operating the 13 existing petrol stations next to our branches and our selling Waitrose products in two Shell forecourts.

“We offer fuel promotions with Shell and vouchers to spend at Waitrose are one of the rewards offered by the Shell Drivers’ Club.”

The spokesperson added that Waitrose acknowledged that Shell was drilling for oil in the Arctic – one of the most vulnerable regions on the planet – but that it was confident the oil firm was operating within the law.

“We understand the US government has decided to allow exploration in the Arctic and that Shell won the contract for this work”, they said.

“Environmental issues are of great importance to Waitrose and Shell has assured us that they will meet US legislation and international conventions, operating with respect for the environment and for the people who live in the Arctic and sub-Arctic regions.”

In a poll published for Blue & Green Tomorrow’s recent Guide to Ethical Shopping, 18% of our readership claimed that Waitrose, which currently has 5% of the UK’s market share, was their main supermarket. And in March, the Salford City branch was given an ‘outstanding’ rating for its environmental standards.

See Greenpeace’s homepage for more information and to add your name to the letter to Waitrose bosses.

The Guide to Ethical Shopping