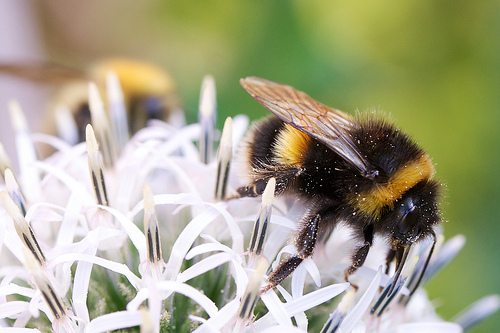 A new study has found that diseases common in managed bees are spreading to wild pollinators, threatening bumblebees’ colonies.

Researchers have revealed that two diseases that are common in the UK’s commercial honeybees, the deformed wing virus (DWV) and the fungal parasite Nosema ceranae can infect wild bees, in particular bumblebees, which are already in worrying decline.

Dr Matthias Fürst from Royal Holloway, University of London said, “Wild and managed bees are in decline at national and global scales. Given their central role in pollinating wildflowers and crops, it is essential that we understand what lies behind these declines.

“Our results suggest that emerging diseases, spread from managed bees, may be an important cause of wild bee decline”.

As the study explains, researchers analysed honeybees and bumblebees from different sites across the UK and discovered that the parasites were widespread on both species.

Another author of the study, Professor Mark Brown said, “We have known for a long time that parasites are behind declines in honeybees.

“What our data show is that these same pathogens are circulating widely across our wild and managed pollinators. Infected honeybees can leave traces of disease, like a fungal spore or virus particle, on the flowers that they visit and these may then infect wild bees.”

The numbers of pollinators in Europe have been falling over the past years and scientists have also linked the phenomenon to the widespread use of pesticides. The European Commission has therefore approved a two-year ban on three neonicotinoids pesticides, in order to help bees to thrive again.