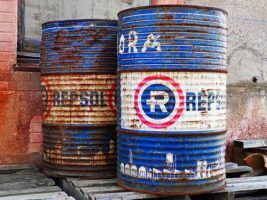 Over the past two decades, there has been an increased awareness of the environmental impact that the large amount of lubricants entering the environment is having. These environmental contaminants come as the result of leakage, throw-off, emissions, spillage and careless disposal of mainly mineral oil based products. In 1999, the U. S. Corps of Engineers coined the term “Environmentally Acceptable Fluids” as those that were readily biodegradable and nontoxic to marine organisms.

1. Sundin Phd., SVB Environmental Lubricants, in his article Sorting out environmentally acceptable fluids, touts the fact that EAFs are gaining in popularity in a variety of applications where the risk to the environment must be minimised. Although they’ve been used in drilling operations for years, mining, forestry, construction, agriculture and municipal services are now turning to EAFs to stay ahead of changing regulations and meet the expectations of stakeholders.

The responsible use of lubricants has become an ongoing responsibility of those who work in industries utilising hydraulic power.

2. Marougy, Lubricant Specialist reports that Governments around the world have enacted regulations aimed at protecting the environment, and they usually carry significant fines and remediation costs for violators. That’s become increasingly important to designers and users of hydraulically powered equipment, especially when operating in wetlands and other environmentally sensitive areas.

While hydraulic hose and connectors perform better than ever, they still have the potential to leak or rupture and spill fluid. Fluid suppliers have responded by introducing eco-friendly biodegradable and nontoxic fluids based on a variety of chemistries. Unfortunately, none of these fluids is a direct replacement for petroleum-based hydraulic fluid.

Although the term biodegradable has become widely used and accepted as a description of the property required for these ecologically friendly fluids, it is not sufficient criterion for complete environmental acceptability.

Other important considerations include:

– Biodegradability or persistence in the environment
– Bioaccumulation potential
– Toxicity in the air, ground and water
– The nature of the emissions
– Whether or not the source is renewable.

Sundin notes that early generations of biodegradable hydraulic oils were often blends of lower-quality vegetable oils mixed with additives that were developed for petroleum-based oils. These additives often contained compounds that hindered the oil’s natural biodegradability. The result was a hydraulic fluid with poor performance at low temperatures, a short service life, and environmental characteristics that were only marginally better than those of the less-expensive petroleum product that it was replacing. 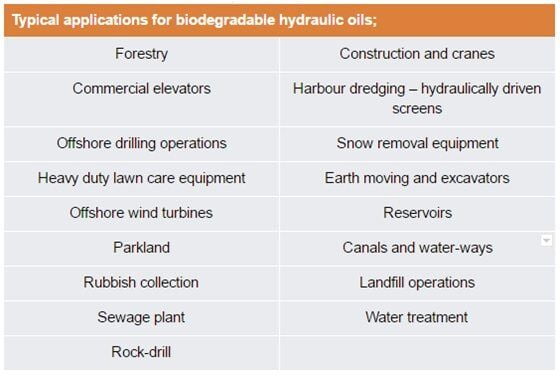 Now, thanks to advances in base oils and additives, EAFs are bringing much more to the table. New synthetic oils are highly biodegradable and can be used at temperature extremes. Selective breeding and genetic modification have resulted in vegetable seed oils with the same service life as mineral oils. The development of new anti-wear compounds has allowed additive manufacturers to develop products with extremely low toxicity and high biodegradability. These new, nontoxic additives have the same performance as older additives that contain zinc.

Various performance characteristics of the different classes of environmental fluids and where each should be utilised.

Based on the extensive findings from Fluid Power, we can conclude that bio-polyolefin synthetic biodegradable oils perform best in offshore fluid power industry applications, whereas the other three types of fluids are too weak to perform well in these very specific applications.

Marougy advises that all hydraulic fluids, not just biodegradable fluids, must be maintained in good condition. Additives may degrade depending on the fluid condition. Operating a fluid at too high a temperature shortens its life, and the presence of contaminants such as water and particulates can promote oxidation and also shorten the life of the fluid. No fluid is maintenance-free.

While actual life depends on the duty cycle and countless other factors, properly formulated and maintained fluid that’s not exposed to extreme temperatures and contamination will give good life in a wide range of applications. Perhaps the most important system consideration is to maintain the fluid in excellent condition and monitor it frequently to ensure it performs as intended in the hydraulic circuit.

Industrial workplaces are demanding environments for machinery. System failures lead to downtime and higher operational costs Fluid Line reports. Flushing is an important maintenance procedure to prolong life and reliability of hydraulic systems. Thorough system flushing is necessary, and it is often advisable to perform multiple flushes to ensure the system is perfectly clean before adding environmentally friendly fluid.

Mobil, the major American oil company findings show that demand for biodegradable hydraulic oils is expected to increase in the next 10 years. Ever-increasing expectations are put on the performance of any modern hydraulic oil, whether synthetic, conventional mineral or biodegradable.

Although chemically based hydraulic fluids are likely to remain the product of choice for some years as EAFs become a more viable option. More companies are choosing to drive green initiatives and come into line with society’s sentiment as well as government guidelines of reducing the environmental footprint of human activities.