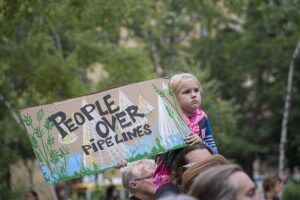 A peaceful rally is taking place at 4pm at the U.S. Embassy on Monday 19 September by Londoners in response to the Standing Rock Sioux Tribe’s plea for international support against the Dakota Access Pipeline .

The huge, four-state pipeline cuts through sacred burial grounds just one mile off the tribe’s reservation in North Dakota. The tribe expresses concern that they were not consulted on the
project, which poses a serious threat to their only source of drinking water; should the pipeline leak, some 10 million people along the Missouri River will be affected.

Delegations from around 200 Native American tribes, as well as allies from around the world, have been camped on the bank of the river in protest against the project. Jon Eagle Sr., an Elder and Historic Preservation Officer for the tribe, said in a public statement “the last time the Seven Council Fires [all bands of the Sioux Nation] came together was 1876, at the Battle of Greasy Grass.” Meanwhile, construction crews are approaching from either side of the camp.

Campaigners for the tribe in London have said Monday’s rally will be guided by traditional Lakota song and prayer and invite the British public to attend. They will be calling on the U.S. government to cancel the building permits for the pipeline, and to release demonstrators who have been arrested at the tribal camp.