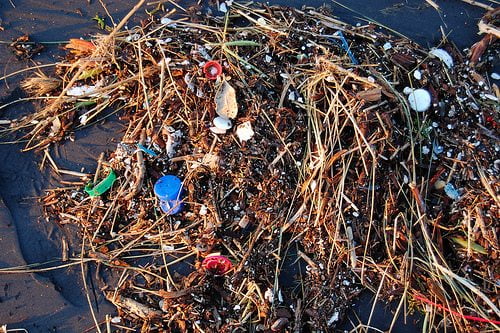 Toxic substances contained in microplastic waste in the sea can enter the tissue of marine animals and alter an ecosystem’s functions, according to new research.

A team of researchers from the National Center for Ecological Analysis and Synthesis (NCEAS) has investigated the effects of the so-called microplastic, tiny parts of the material that go wasted in the seas, on lugworms.

They found that when the animal eats the plastic, the toxic chemicals and additives contained in it can enter the tissues and compromise key vital functions.

Lead author of the report Mark Browne said, “The work is important because current policy in the US and abroad considers microplastic as non-hazardous.

“Yet our study shows that additives, such as Triclosan (an antimicrobial) that are incorporated into plastics during manufacture, caused mortality and diminished the ability of the lugworms to engineer sediments. Large accumulations of microplastic have the potential to impact the structure and functioning of marine ecosystems”.

Lugworms were chosen as subjects because they are found in the US and Europe, they are eaten by many seabirds and used as bait by fishermen. They play a crucial role as they eat organic matter from the sediment and prevent the build-up of silt.

But it was proved that the pollutants entering their body caused thermal stress and the inability to consume as much sediment.

Browne added, “For more than 40 years the bit that the scientists and policymakers didn’t have was whether or not these particles of plastic can actually transfer chemicals into wildlife and damage the health of the organism and its ability to sustain biodiversity. That’s what we really nailed with the study.”

In October, a study suggested that plastic pollution, including microplastic materials, was not limited to the oceans, but was affecting lakes too.