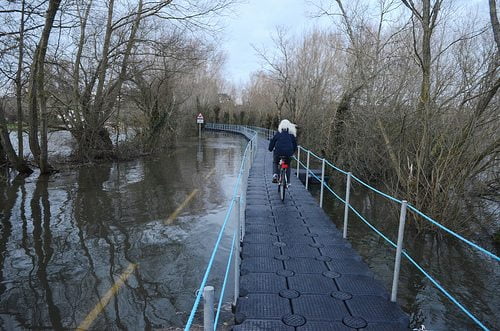 The government may send the military to the heavily flooded Somerset Levels to assist people who have been cut off since Christmas, the environment secretary has revealed.

Owen Paterson said the Ministry of Defence (MoD) might “deploy specialist vehicles” to affected areas of the Levels, where about 11,500 hectares are flooded beneath 65 million cubic metres of water.

A MoD spokesperson also said that military planners had been sent last night to establish what support locals might need.

On Monday, Paterson visited the flooded communities of the Levels, some of which have been cut off for about a month, and was confronted by angry residents asking why the Environment Agency had not dredged the local river.

Prime minister David Cameron responded by saying that dredging would have begun as soon as flood waters had sufficiently receded, though some experts have said dredging would not have prevented flooding in Somerset.

Environment Agency chairman, Lord Smith, argued that the technique makes only a small difference and is not a “comprehensive answer“.

The Environment Agency is currently trying to pump water out of the area, but with more heavy rain expected to sweep across the southwest in the coming days, residents fear the end is not yet in sight.

The flooding of the Somerset Levels is currently the most high profile case in a series of floods caused by heavy rains and high tides since the Christmas period.

The government’s efforts to help those affected have seen Paterson subjected to frequent criticism, as MPs and campaigners have questioned the wisdom of government enforced Environment Agency budget cuts.

In response, Paterson insisted that the current government was spending more on flood defences than any before it, but it has later been forced to admit this is not the case.

It has also emerged that the government’s drive to attract private sector funding to finance defences raised only £37m of the £2.34bn required.