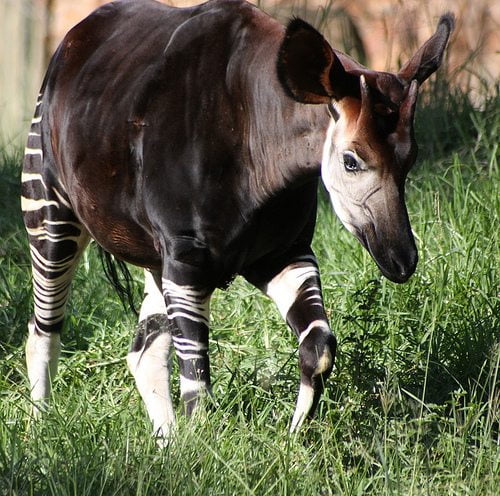 The okapi, a close relative of the giraffe and the national symbol of the Democratic Republic of the Congo (DRC), is on the brink of extinction, according to the latest checklist of threatened species.

The horse-sized creature, with its striking zebra-like markings and long blue tongue, is unique to the Ituri rainforest in the north-east of the country. It is also known as the ‘forest giraffe’ and is revered in its homeland.

However, the latest update of the International Union for the Conservation of Nature’s (IUCN) Red List of Threatened Species says that the okapi is now endangered, rated as being only one step away from the highest risk of extinction. Estimates have placed the global okapi population at somewhere between 10,000–35,000

The IUCN says that poaching and habitat loss, as well as the disruptive presence of rebels, elephant poachers and illegal miners in the Ituri rainforest, are to blame.

In one incident in June 2012, rebels killed 14 okapis and six people, in an attack on a reserve in Epulu. The massacre was reportedly a response to a crackdown on poaching and illegal mining in the region.

“The okapi is revered in Congo as a national symbol – it even features on the Congolese franc banknotes”, said Dr Noëlle Kümpel, co-chair of the IUCN SSC Giraffe and Okapi Specialist Group and manager of the Zoological Society of London’s okapi conservation project.

“Sadly, DRC has been caught up in civil conflict and ravaged by poverty for nearly two decades, leading to widespread degradation of okapi habitat and hunting for its meat and skin. Supporting government efforts to tackle the civil conflict and extreme poverty in the region are critical to securing its survival.”

Jane Smart, global director of the IUCN’s Biodiversity Conservation Group, added that the latest version of the Red List featured some success stories. In particular, the leatherback turtle, two species of albatross and the island fox are now listed as having improved statuses.

However, she added, “The overall message remains bleak.” Of 71,576 species assessed, the IUCN found that 21,286 are threatened with extinction.

Smart said, “With each update, whilst we see some species improving in status, there is a significantly larger number of species appearing in the threatened categories. The world must urgently scale up efforts to avert this devastating trend.”