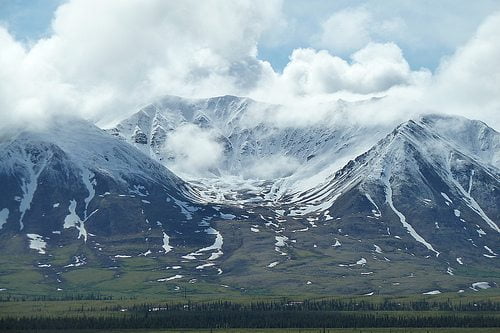 October temperatures across Alaska were “decidedly above normal both across the state, and throughout the month”, according to climate scientists in the region. As a result, a number of new record highs were recorded.

The monthly mean temperature was a “very significant” 7.4F (4.1C) above the normal 32.4F (0.2C) temperature recorded in the area. The Alaska Climate Research Centre said that this was an “astounding departure” for an area as large as the state of Alaska.

A “very large number of record temperature events” were reported throughout October, all of which were record highs. The Delta Junction area had a total of five new records set and one tied record alone. The new record for Delta Junction was 62F (16.7C), shattering the 1962 record by 19F (10.6C).

Two other regions, Homer and Bettles, recorded five events each. Three of the records broken across Alaska had been in place since 1936, demonstrating how warm the area became when compared to the norm.

Rainfall was also “significantly above normal for the state” last month, at 159% of normal. Just four out of 20 of the Alaska Climate Research Centre’s stations reported precipitation below average levels.

The organisations commented, “Some of the colder locations reported temperatures between 10 and 30 below 0F (-17.8C). This is a dramatic shift from they very warm temperatures experienced during October and early November.”

Earlier this year, figures showed that Greenland had experienced its highest temperature since records began. The new record stood at 25.9C beating the previous high of 25.5C, which was recorded in 1990.

As temperatures begin in rise in the Arctic region scientists have predicted that Greenland could be greener by the end of the century. The country is around 80% ice.