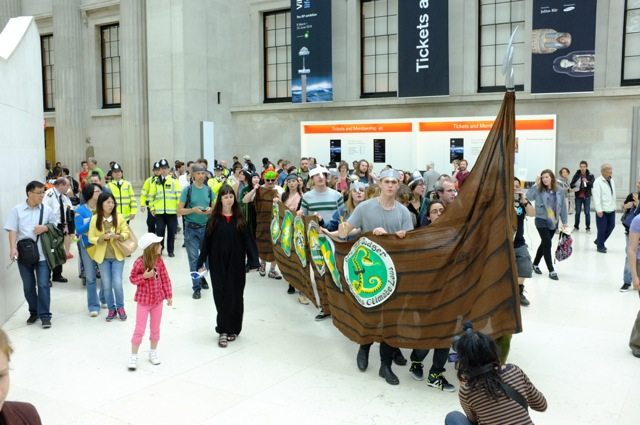 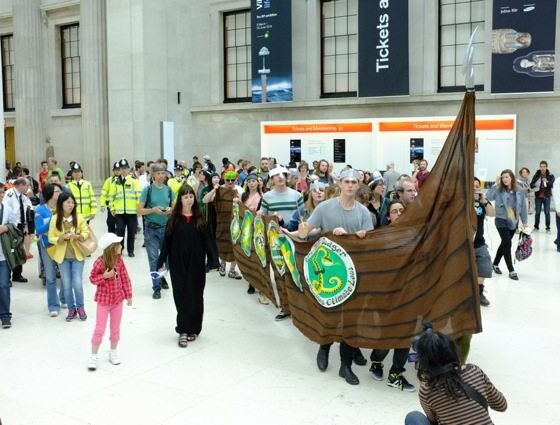 Hundreds of people gathered to protest against the BP-sponsored Viking exhibition at the British Museum on Sunday. The Reclaim Shakespeare Company hosted a ‘flash-horde’ protest where a makeshift 15-metre long ship was bought into the museum.

The group has been advertising the protest since May and invited the public to attend in order to open discussion on BP’s sponsorship of the arts.

The aim was to “make it into a public issue” and the group has said they have had more response then ever since the protest with lots of new people interested in the campaign.

Danny Chivers, a member of the BP or Not BP protest group told Blue & Green Tomorrow, “With 200 people turning up to give BP a Viking funeral it is very hard for the museum to ignore.

“The British Museum’s response to the protest was totally over the top with the museum searching every person and confiscating non-harmful items such as guitars and drums.

“It must be having an affect or they wouldn’t be trying to stop us”, he added.

A man known only as Thor was arrested for breach of the peace. However, Chivers says he was “simply standing in a queue talking calming to a security guard” and this “reflects badly on the museum”. This was the first arrest of all protests held by the group at the museum and the man was held for two hours then released without charge.

The BP or Not BP group says it will not stay quiet at what it calls this “unlawful arrest” and is waiting for a response from the museum.

The British Museum has said, “The protest on Sunday was disruptive to visitors in the Great Court but Museum staff worked to ensured that the risk to the safety and security of visitors and the collection was kept to a minimum. The galleries and BP exhibition, Vikings: life and legend remained open. One person was arrested for breach of the peace.”

The museum also commented, “The British Museum is exceptionally grateful to BP for their loyal and on-going support.”

The Reclaim Shakespeare Company is part of a larger campaign group, Art Not Oil and recent demonstrations have included a theatrical protest against BP’s sponsorship of the Royal Opera House.

To BP or not to BO? Protest against oil giants british museum sponsorship