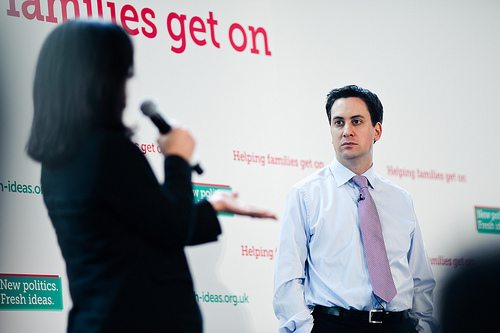 With just over a year until the 2015 general election, battle lines are being drawn by the major political parties. This week, Ed Miliband will set out his plans to make the economy work for the British middle class.

At last year’s party conference, the Labour leader said how his party would help the most vulnerable in society – those struggling most with the cost of living. He pledged to freeze energy bills for a 20-month period, in order to give the energy market a complete facelift so that it works for the benefit of the consumer and not shareholders.

In addition, Labour politicians have been shouting the loudest when it comes to poverty – the spare room subsidy or “bedroom tax”, which they say has pushed many into poverty, is a policy that the party has pledged to reverse if it comes to power in 2015.

But this week, Miliband has set his sights on an entirely different voter. In an attempt to woo the middle class voter, he wrote an article in the Telegraph – a paper that is generally critical of his party and its policies – in order to highlight those being squeezed by the “cost of living crisis”.

“The British middle class is being squeezed by a cost of living crisis as never before”, he wrote.

“And people grafting to join it find that the obstacles in their way are getting bigger. The motors that once drove and sustained it are no longer firing as they used to. Access to further education and training, good quality jobs with reliable incomes, affordable housing, stable savings, secure pensions: they have all been undermined.”

Of course, there are many elements that factor into the debate – with many seeing their income falling in real terms whilst housing costs, fuel prices and energy bills continue to rise. There are significant structural issues to be resolved, and the electorate needs to be sure that the person and party they are voting for has the policies and values to address them.

Miliband said that households are, on average, £1,600 worse off under the coalition government, which comes as a result of job creation in the wrong areas. He adds that more than half the jobs that have been created since the last election are in low-pay industries.

The task in clearing up the mess, he added, will require “serious long-term changes being made to our economy”, in terms of finance, skills and wages.

According to recent opinion polls, Labour’s lead has dropped two points to 35% in the last month alone, and eight points within the last three months. This leaves the party just three points ahead of the Conservatives.

A Guardian poll says that a narrow majority (52%) of voters feel that they are able to keep up with the cost of living, and as such, confidence is growing in the economic recovery, echoing George Osborne, who said in his autumn statement that the economic plan was working.

Further details of Miliband’s plans to build his One Nation economy are to emerge in the coming weeks.

Labour may have some advantages when it comes to the working poor. However, in order to win over the hearts and minds of the larger middle class, the next few months are going to be crucial for Miliband. He won’t be the only party leader seeking support in the middle ground.