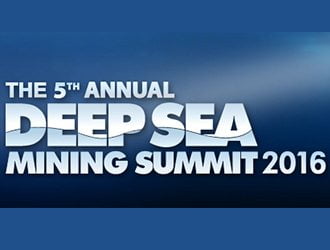 Pacific Societies Call to Save Their Seas

National Governing Bodies and civil societies are calling on the European Union to stop funding “reckless development activities”. The South Pacific Ocean is widely used for exploration and experimentation and at the 5th Annual Deep Sea Mining Summit yesterday there was a call for a ban on this “frontier” industry. NGOs, communities and churches across the Pacific are backing the fight to save their ocean.

Natalie Lowrey, from the Australian based Deep Sea Mining campaign, said: “The South Pacific is currently the world’s laboratory for the experiment of seabed mining. With over 1.5 million square kilometres of ocean floor already under exploration leasehold the world’s first licence to operate a deep sea mine has been granted in Papua New Guinea to Canadian company Nautilus Minerals Solwara 1 project in the Bismarck Sea.”

The Alliance of Solwara Warriors, which is made up of over 20 communities and organisations across the Bismarck and Solomon Seas, are making a stand to ‘Ban Seabed Mining’ in PNG and the Pacific.

Patrick Kaupun, from the Alliance of Solwara Warriors, said: “We call on Papua New Guineans and allies internationally to stand up and defend the Bismarck Sea and all other seas under threat from seabed mining. Our government and Nautilus Minerals have not got the people’s free prior and informed consent. The sea is our life. We exist because the sea exists. We will not continue to remain quiet and passive. We have a responsibility to those generations that come after us; to those yet unborn.”

Janet Tokupep, from the Alliance of Solwara Warriors, added: “Judging from the monster size of the machines that will be tested in our seas, there is no question that this new “frontier” industry will destroy our environment and communities in PNG and the Pacific.

“With such serious liabilities in the face of an untested and untried industry, including the fact that we currently have terrible track records of terrestrial mining, seabed mining is a disastrous investment.”

Joseph Lambert from London based organisation, The Gaia Foundation, said: “This highly experimental mining is being rushed ahead with more concern for profit than the damage it will do to the environment and communities. Our oceans are already facing unprecedented warming and acidification; when we should be caring for it most, mining companies are devising new ways to pollute it.”

A recent report from the World Bank stated that Pacific Island countries should take precaution over any plans for mine on their seabed due to a high risk of irreversible damage to their ecosystems. This calls into question EU funding towards the development of seabed mining in the Pacific, an industry which would be unacceptable in its own member countries.

Lowrey added: “This is 21st Century colonialism. By funding and endorsing this experimental extractive industry, the EU are complicit in continuing the ‘empire’ tradition in which it believes it should be free to rape and pillage the Pacific for its own profit.”