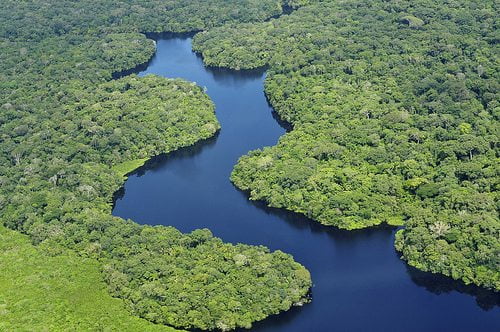 Planned Amazonian Dams to Bring Doom for Many Tropical Species

Rampant dam-building across Amazonia will cause countless species extinctions – according to new research involving the University of East Anglia.The nine countries that share the Amazonian biome have already built 191 dams across the basin and plans are in place to develop a further 243. But a study published today by an international research team reveals that dam-building will have severe impacts on wildlife in one of the most biodiverse freshwater ecosystems on the planet.

Fish, freshwater turtles, frogs, bats, birds, primates, rodents and marsupials would all be affected – along with trees and plants.

Ironically, many of the species threatened by dams in Amazonian Brazil are strictly protected by law from being hunted and traded. However there are no legal provisions to protect them from dam-building projects.

Prof Carlos Peres, from UEA’s School of Environmental Sciences, said: “The watersheds of the Amazon River and adjacent Tocantins River are an attractive prospect to dam builders as these basins account for 6 per cent of total global hydropower potential.

“The rivers that run across these tropical forest landscapes are home to many endemic species – species that are found nowhere else. Some of them are restricted to isolated sections of rapids only a few tens of kilometres in length.

“Our research shows that an expansion of the dam network will result in huge changes to these Amazonian rivers by obstructing movement of aquatic fauna both upstream and downstream, by submerging rapids under huge lakes, by flooding adjacent forests and by creating forest islands that cannot sustain viable animal and plant populations.

“These changes to the habitat will also be followed by indirect effects on the region’s fauna and flora because the influx of people and money attracted by cheap hydropower are expected to result in higher deforestation rates in the areas affected by dams.”

Lead researcher Dr Alexander Lees of the Cornell Lab of Ornithology, said: “The change from fast-flowing to still waters after river impoundment likely favours generalist or invasive species over the specialist and often micro-endemic species that require fast-flowing rivers and exposed rocky islets.”

“This loss, degradation and fragmentation of habitats will eventually lead to a large loss of regional biodiversity and a simplification of the community of species.”

Prof Carlos Peres added: “Even terrestrial wildlife and woody plants in forest areas well above the water-level of hydroelectric reservoirs are not safe, as these populations typically become stranded in artificial archipelagos whose biodiversity is committed to extinctions and rapidly eroded over time through the ravages of habitat isolation and edge effects.”

Dr Philip Fearnside of Brazil’s National Institute for Research in Amazonia (INPA) said: “The planned dams are not an inevitable part of Brazil’s future development because they are not necessary. Brazil has many better options, including investing in energy efficiency, ceasing to export electricity in the form of aluminium and other electro-intensive commodities, and tapping the country’s vast potential wind and solar resources. The severe impacts of Amazonian dams make pursuing other options very much in Brazil’s best interest.”

‘Hydropower and the future of Amazonian biodiversity’ is published in the journal Biodiversity and Conservation.