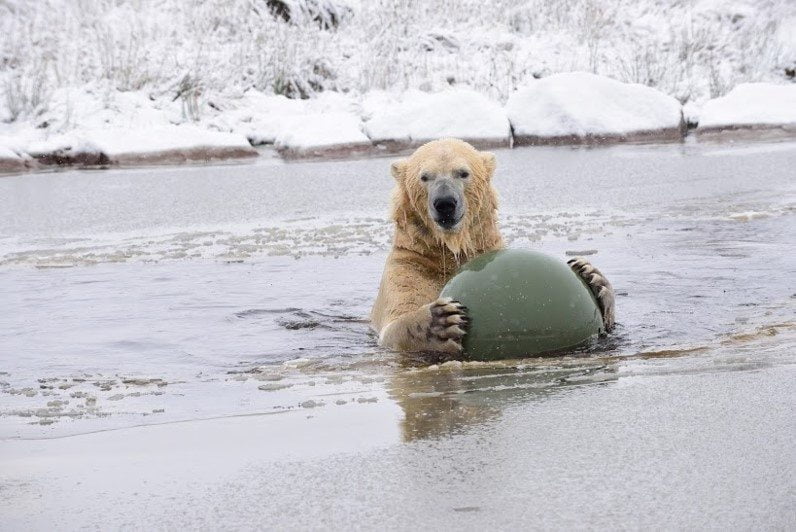 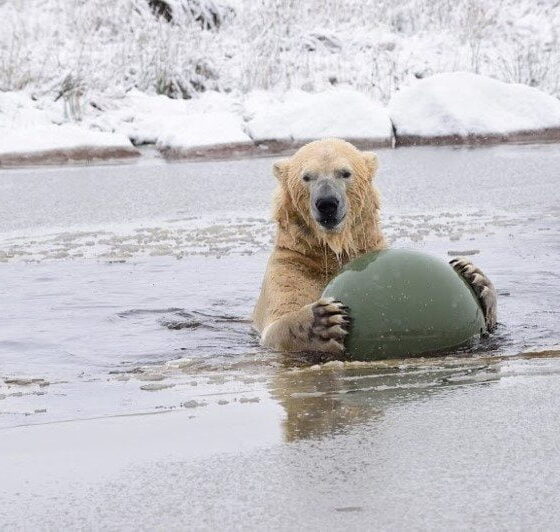 Keepers at RZSS Highland Wildlife Park, near Aviemore in Scotland, celebrated not one, not two, but THREE polar bear birthdays this Christmas with a grand joint birthday celebration on Friday 11 December.

New girl Victoria, who arrived at the Park in March this year, turned 19 years old, whilst males Arktos was eight and Walker, the baby of the bunch, was seven.

The two male polar bears were gifted a huge ‘play ball’ from players of People’s Postcode Lottery. Walker and Arktos became firm friends when they moved in together two years ago, with their playful bromance going from strength to strength. The ball is a whopping 70cm in diameter and is specially made for large animals like polar bears. Not to be outdone, the female Victoria was treated to a special frozen birthday cake made from ice and fish.

Vicky Larkin, Head Carnivore Keeper at RZSS Highland Wildlife Park, said: “Although they often are given a range of polar bear-friendly toys, this is the first time we’ve given Walker and Arktos, our very playful male polar bears, a huge ball specially made for large powerful animals and we were extremely excited to see their reaction. Thanks to players of People’s Postcode Lottery who kindly donated the enrichment item, we were able to purchase and import this special toy.  Arktos had a wonderful time rolling the ball around their huge six acre enclosure and playing with it in their pond; it was and will continue to be great exercise and help the males to stay fit and healthy.

“All the animals at RZSS Highland Wildlife Park that require it regularly enjoy a programme of ever-evolving enrichment to provide extra stimulation and help facilitate natural, species-typical behaviour, enhancing physical and mental well-being. Our girl Victoria is a much calmer bear and enjoyed eating her cake, although I’m sure the boys won’t mind sharing their nice new toy with her.”

Barbara Smith, Managing Director for the Royal Zoological Society of Scotland, said: “RZSS has already received £300,000 from players of People’s Postcode Lottery since the beginning of 2014, and is receiving another £200,000 in 2016. The fantastic support from the players not only helps with projects around RZSS Edinburgh Zoo and RZSS Highland Wildlife Park, but also contributes to the charitable work of the Royal Zoological Society of Scotland across the world.”

Clara Govier, Head of Charities at People’s Postcode Lottery, said “We are delighted to have donated the green enrichment ball to Walker and Arktos, RZSS Highland Wildlife Park’s resident male polar bears. Players of People’s Postcode Lottery have so far raised over £500,000 for RZSS, helping support animals in both parks and the charity’s conservation work, both in Scotland and in over 20 countries around the world.”

Polar bears are listed as Vulnerable on the IUCN Red List and are under increasing threat due to the loss of their natural habitat as a result of climate change. They are the largest land carnivore with adults reaching 2.6m in length and they are found in the very north of Alaska, Canada, Greenland, Norway and Russia.