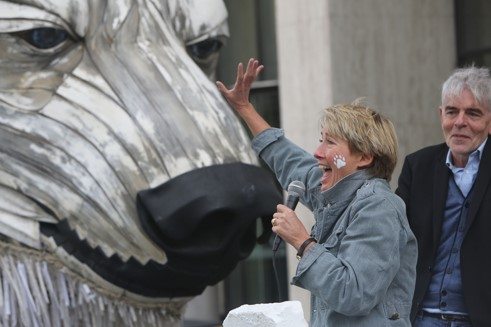 The Guardian newspaper reported Shell executives were “taken aback” by the global protest movement, and that it was “threatening to seriously damage its reputation”. The Financial Times reported that senior Shell executives concede the Arctic protests have had “a bigger impact than expected”. More than 7 million people have signed up to the Save the Arctic campaign, which Greenpeace launched in 2012.

After speaking to the crowds, Emma helped volunteer puppeteers move Aurora the double decker bus sized polar bear from in front of Shell’s front door, where she has been standing, for the past month, in protest at Shell’s Arctic oil drilling. Now Shell has announced its Arctic exit, the bear will be transported to Paris where the nations of the world will soon gather to negotiate a deal on climate change.

Emma Thompson said: “This polar bear has been outside Shell’s HQ for a month, representing the seven million people who mobilised to fight its Arctic drilling plans. We said we’d keep her here as long as Shell was drilling. Now we’ve won, we kicked Shell out of the Arctic, so today this bear and this movement is declaring victory and starting out on a new journey.

“Now she’s going to Paris, where the nations of the world will soon gather to negotiate a deal on climate change. Shell’s defeat shows which way the wind is blowing. This bear goes to Paris as proof that when we can win big victories on climate change.

We’re going to take that energy, that optimism, the people-power that beat Shell, and we’re going to use it to challenge the other countries and companies threatening our collective future by looking for new reserves of fossil fuels. I’m asking everyone now to come with us to Paris. I’ll be there too.”

This year Shell has faced increasing public pressure over Arctic drilling. Shell’s Arctic rig the Polar Pioneer faced multiple protests as it travelled to the Arctic, including activists boarding it in the middle of the Pacific Ocean, a several thousand strong ‘Kayaktivist’ protest movement in Seattle, and an Indigenous activist protest at sea as it sailed through Canadian waters. Shell’s icebreaker ship the Fennica, part of its Arctic fleet, was delayed in Oregon by a 40-hour ‘hanging blockade’ from the St John’s Bridge, Portland.

In recent weeks, figures from the arts and entertainment world such as Peter Capaldi, John Hurt and Maisie Williams spoke out against Arctic drilling. And public figures such as Al Gore, Hillary Clinton and the Archbishop of Canterbury expressed concerns about Arctic oil drilling. It was reported this month that Shell exited the Prince of Wales Corporate Leaders Group amid concerns over its Arctic drilling programme.