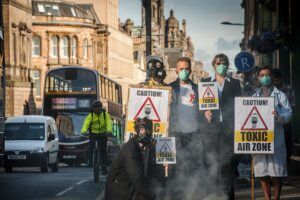 The Clean Air Act, introduced 60 years ago, still does not prevent the death of thousands of people in Scotland.

In a decisive and successful response to the Great Smog of 1952 that killed 12,000 people, the Clean Air Act of 1956 introduced controls on industrial pollution and the burning of coal. However, since the 1950s traffic levels have sky-rocketed and air pollution now claims over 2,500 lives in Scotland annually.

“On the 60th anniversary of the Clean Air Act, we urge the Scottish Parliament to draw inspiration from that law and to take decisive action against modern air pollution, responsible for over 2,500 premature deaths every year in Scotland.

Air pollution has changed since the 1950s, but it remains devastating to public health.

Back then, pea soupers were caused by coal smoke from heavy industry, but today’s air pollution is an invisible killer, largely coming from the massive volume of traffic which chokes our roads and cities.

“Scotland’s toxic air continues to break national and European safety standards with 32 designated Pollution Zones across the country where levels are deemed to be unsafe. Since Scotland missed its 2010 EU clean air deadline, over 15,000 people have died early from air pollution. The Scottish Government has failed to take this problem seriously enough.

“The Scottish Government has a new plan for clean air with its ‘Cleaner Air for Scotland’ Strategy, but much more action is needed. Cleaner Air for Scotland sets the groundwork for Low Emission Zones to be introduced in key Scottish cities, but the Government needs to commit serious funding to councils if it is to become a reality. It must also commit to reducing the amount of traffic on our roads, and tell us once and for all when it is aiming for Scottish air quality safety standards to be met across the country.

“The pea-souper smogs of the 50s were very visible, but today’s air pollution is formed by gases and particles that are so tiny you cannot see them. Sixty years ago, respiratory illness was the main health impact of air pollution. Today, air pollution particles from traffic fumes are much smaller and can cross from the lungs into the bloodstream, and are linked to strokes, heart attacks, endocrine damage and even dementia and diabetes.”

“Air pollution is still a real and deadly problem, worse because it’s invisible. Much more needs to be done to protect children’s growing lungs and brains.

I am affected by asthma even on days when air pollution is low.

Asthmatics are like the canaries down the coal mine, sounding an early warning.