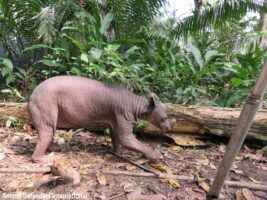 ‘The bear with no hair’, Cholita, is enjoying her first anniversary of freedom in the jungle.

Meanwhilst the Animal Defenders International (ADI) launches an appeal to rescue another bear to join her – and also starts an initiative across South America to protect endangered Spectacled bears after reported attacks.

Watch and enjoy this wonderful video that celebrates a year in the Peruvian jungle for hairless Spectacled bear Cholita, dubbed the ‘real life Paddington bear’. The elderly bear had been mutilated in a circus – her fingers were cut off, her teeth snapped off and she lost all her fur due to stress. Her story captured the hearts of people across the world.  To view the video, click the following link. https://www.youtube.com/watch?v=9F5snjzEsFc.

Cholita was rescued by Animal Defenders International (ADI) and taken home to the forest from where she had been stolen some 20 years earlier. She is cared for in a specially built ADI enclosure and now has two more Spectacled bears as neighbours – Lucho and Sabina.

In poor health when rescued, even provided with an oxygen tent when ADI took her over the Andes to her new home, Cholita has flourished and is enjoying life back in the forest.

ADI has launched an appeal to rescue another balding female Spectacled bear called Dominga, who is currently living alone in a small zoo in the Andes, as there is no other place for her. ADI must raise £18,000 to cover the cost of completing an enclosure next to Cholita’s, a rescue and veterinary team, a travel crate and transport. To donate, please visit http://www.ad-international.org/animal_rescues/go.php?id=4242&ssi=24 or call 020 7630 3340.

Animal Defenders International President, Jan Creamer said “It is an absolute joy to see Cholita enjoying her new home, and the sights and sounds of the forest which she was cruelly denied as a baby. Now the future of another bear hangs in the balance. Dominga’s forever home awaits her in the forest – please help us rescue Dominga.”

ADI is also launching an initiative across South America for the protection of Spectacled bears, following the discovery of a severed bear claw by wildlife officials at the Colombian National Park headquarters, alongside an anonymous note threatening further bear killing. Information about this campaign can be found by clicking on the following link. http://www.ad-international.org/conservation/go.php?id=4251&ssi=14