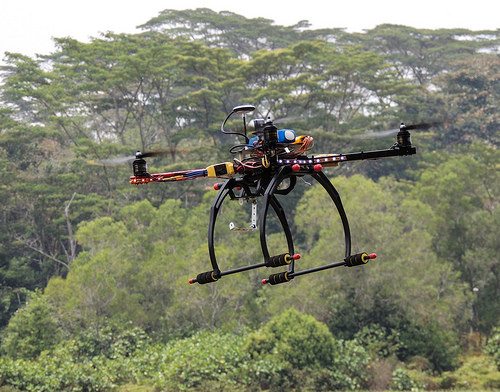 The Royal Society for the Protection of Birds (RSPB) plans to control and observe Britain’s bird population and monitor the most vulnerable species by using military technology to spy on remote areas.

The charity said that by using a remotely controlled drone, they would be able to observe birds with less intrusion and access more remote areas in wetlands.

Nigel Butcher, RSPB technical development officer, is behind the project. He said, “A lot of our stuff filters down from military use. We built the ‘copter about a year ago and have added bits and pieces to it since, like radio tracking, thermal imaging and wide-angle cameras.

“In the case of a marsh harrier, we might want to use it to check on the state of a nest without traipsing in. We don’t like to put cameras close to nests until the eggs have hatched, because the birds can be prone to deserting the nest.

“But with the drone you can scoot it round to confirm the state of the nest. The alternative is having eight or ten people trampling through a reed bed in knee-high waders causing a lot of disturbance.”

Drones, or unmanned aerial vehicles (UAVs), are usually employed in military operations of surveillance and attack. However, they have been increasingly used in a number of civil ways.

Online retailer Amazon revealed last year that it was testing whether it could use drones to deliver goods to customers. While in the conservation world, the WWF uses the technology in Africa to tackle the illegal hunting of wildlife.

Elsewhere, marine conservation charity the Black Fish employs drones to expose illegal driftnets in the Mediterranean Sea. Sea Shepherd Conservation Society started to use UAVs back in 2011 to spy on the Japanese whaling fleet; in the UK the League Against Cruel Sports used them to expose illegal fox hunting but the practice was contested as an invasion of privacy.