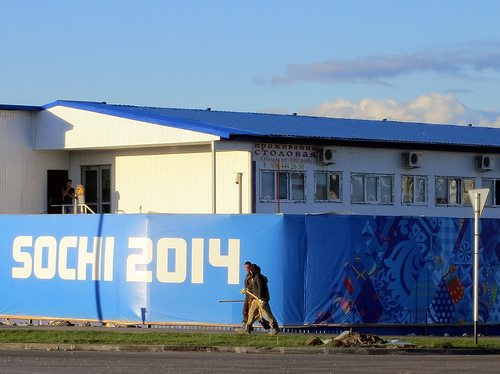 Sochi 2014: how Russia’s Winter Olympics have failed on sustainability

The 2014 Winter Olympic Games start in the Russian city of Sochi on Friday. They open amid controversy and questions around sustainability and human rights.

In 2009, organisers of Sochi games said they expected the event to be the greenest Olympics ever. They claimed there would be no waste, infrastructure would be built with a minimal impact on sensitive areas and sustainably sourced material would be used.

Sadly, actual events have been rather different. Many venues are built in Sochi national park, in the Caucasus Biosphere Reserve buffer zone in Western Caucasus – a World Heritage Site, as accredited by UNESCO.

Suren Gazaryan, a zoologist and member of the Environmental Watch of the North Caucasus (EWNC) group, was exiled from Russia and handed criminal charges for his campaigning work. He told TIME magazine in January, “The most dangerous and important part of the damage is the biodiversity lost in the area. Parts of the national park have been completely destroyed. This area was the most diverse in terms of plant and animal life in Russia.”

Russian promises to create an ornithological park and plant 1.5m new trees seem quite weak compared to the damage already done to a once thriving ecosystem.

While environmentalists denounced the environmental damage, claims that the Games would be “zero waste” turned out to be false. In fact, piles of waste were found dumped illegally to the north of Sochi, as discovered by the Associated Press in October.

Activists and residents who criticised and tried to oppose the development of Sochi were reportedly harassed and intimidated by government officials.

The event’s main sponsors – including Coca-Cola, McDonald’s and Dow Chemical – also have dubious sustainability credentials. The London 2012 Games, whose list of sponsors included oil giant BP as the official sustainability partner, received similar criticisms. This is despite the International Olympic Committee (IOC) stressing the importance of practices that respect the environment.

Chemical giant Dow, which has a record of toxic spills in the US and elsewhere, has been asked to offset the emissions from the games. It expects to remove the equivalent to removing approximately 102,000 cars from US roads.

Environmental damage is not the only reason the Sochi games are the subject of debate. Following the introduction of new legislation, the Russian government has forbidden the “propaganda of non-traditional sexual relations”, which makes it illegal to campaign for gay rights and same-sex relationships.

Although authorities assured competing nations that the legislation would not affect athletes, the traditional pavilion to celebrate LGBT sportspeople, called Pride House, has been forbidden in Sochi. This is because it could apparently “undermine the security of the Russian society and the state and provoke social-religious hatred, which is the feature of the extremist character of the activity”.

This move led to huge criticism from the global LGBT community. It even convinced some of the world’s leaders, including presidents of Canada, US and France, not to attend the games.

As if that’s not enough, Russia gained more enemies in the form of animal rights supporters, after it ordered authorities to kill stray dogs in Sochi, by either poisoning or shooting. Meanwhile, recent terror attacks in Volgograd by North Caucasus insurgent groups forced president Vladimir Putin to send military to the region where the Games are held, which is very close to Chechnya and Dagestan.

Environmentally and socially, large shadows loom over these 2014 Winter Olympic Games. Many things could – and should – have been done differently. A former member of the IOC, Els van Breda Vriesman, recently told Dutch broadcaster NOS that if members could vote for the 2014 host city again today, they would not choose Sochi.

The athletes on show are among the best in the world in their disciplines. They are strong and fast; tough and skilled. They will make sure that from a sporting perspective, the 2014 event will be the most spectacular and captivating Winter Olympics in history.

But after a series of controversies in sustainability and human rights, perhaps Russia simply wasn’t ready to showcase such talent.