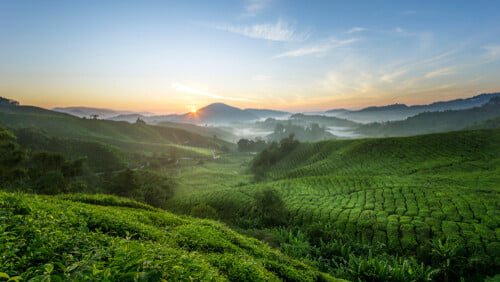 4 Soothing Benefits Of Listening To The Sounds Of Nature

The pure relaxation and calmness that takes over you when listening to the sounds of nature such as leaves rustling in the wind or water flowing down a stream is not something that happens randomly. Multiple researches point to the fact that a scientific explanation can be formulated on why the sounds of nature have such a replenishing and restorative effect on our body and minds. And all the latest directions in studying the brain and the effect of nature sounds on it, turn to the fact that they physically modify the synapses in the brain, managing to optimize the connections between neurons as well as reducing the flight-or-flight instinct.

It doesn’t really matter if you’re a fan of nature or not, you might have noticed that when you’re surrounded by green grass and peaceful nature sounds such as a running stream, birds singing in the trees or simply the wind moving the leaves in a forest, you suddenly become a lot more peaceful and content. Well, recent studies show that it’s not just a self-induced state since a group of researchers decided to monitor the brain waves, heart rate and a lot of other markers for people exposed to nature sounds.

First of all, you should keep in mind that the differences between results registered when using recorded nature sounds in a peaceful environment such as their own living room or a relaxation space and the ones captured in a natural scenery, are not different at all. So, right from the start it is safe to assume that the brain enjoys the power of relaxation brought by nature sounds no matter if it’s directly exposed to nature or a mere recording of those sounds.

Another incredible reading of the multiple sensors researchers place on volunteers showed that the heart rate also shifts along with the entire nervous system. When exposed to nature sounds, the individuals registered a decline in the sympathetic responses of the body and, respectively, an increase in the parasympathetic responds, the one that is responsible of the unconscious acts such as breathing, digestion after a meal and even preparing the body for a nap. So, this clearly comes to prove that the exposure to nature sounds enhances the body ability to ‘disconnect’ and let go of its natural ways of response, relaxing the central nervous system and allowing you to truly get connected with your inner peace.

Besides all the other positive effects that listening to nature sounds can bring for the human body that are directly linked with productivity and stress levels, there’s another interesting result that can’t be overruled. People that were exposed to nature sounds, and especially those that had high stress levels to being with, started to show a more positive attitude when being confronted with day-to-day problems and difficulties. Then, to make the test even more relevant, an in-depth study was made among the relatives and acquaintances of the same individuals in an effort to identify what were the normal answers they would give in previous occasions. A significative drop in stress, tension and irascibility was registered in the vast majority of those interviewed. Furthermore, in order to clearly establish that the effects of nature sound and natural peacefulness are not just episodical, the same survey was conducted for the next month among the persons interviewed and the results showed a clear drop in crankiness and tension.

4. Getting in Touch with Mother Nature

With all the technological development and innovation that humans registered in the course of last decades, it was inevitable that a certain rupture between human beings and mother nature took place. And even though technology and nature are not opponents, people seem to have an in-bread appetite to choose one or another for various reasons. Well, no matter how tech-savvy you are or how you might feel that you can’t go 2 days without your laptop or smartphone, spending some time deep in the woods will give you the chance to connect to something much more important and interesting. You will be given the chance to re-connect with mother nature itself and enjoy the benefits of living in harmony with all that’s alive around you.

Its true, technology helped providing a safer, faster and healthier life for all human beings all around the world, however, nobody should forget that we’re connected with nature and everything that surrounds us. And just like the wisdom teeth are stubborn enough to grow thousands of years past their genetical absolution, the instinct to return in the nature and get rid of all the technology and concrete, is not going away either.

Sure, this doesn’t mean that you should quit your job and go live Mowgli in the Jungle Book. It’s enough to remember every once in a while, that your body needs this sort of re-connection with nature in order to function properly.

Being Exposed to Nature and Nature Sounds Increases Focus and Productivity

At this point it might not come as a surprise that people that choose to listen to recorded nature sounds or simply go deep in a forest or near a waterfall to enjoy the symphony of nature, are a lot more probable to deliver more productive work and be able to focus better. Researchers weren’t able to put a direct link between the benefits of listening to nature sounds and an increase in focus and productivity, however, there’s clearly something going on there.

This is not going to go well with the fans of scientific evidence and raw data, however, the best bet to why nature sounds and simply spending time in nature is so beneficial for human beings might rest in the simple fact that it’s hard-coded in our DNA. And no matter how technologically advanced homo sapiens will get in the future, the need to re-connect and maintain a close connection with nature and the very source of energy that powers this planet, will not be erased.