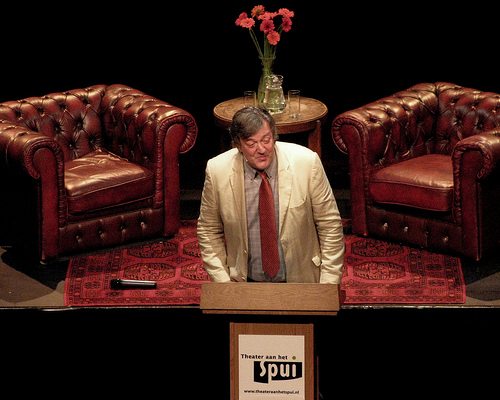 The comedian Stephen Fry opened a day of debate around privacy and state surveillance by describing the government’s actions as “squalid and rancid”, on the anniversary of the original publication of the Edward Snowden leaks.

“Using the fear of terrorism we all have, the fear of the unknown we all share and the fear of enemies who hate us is a deeply wrong base in which to use when spying on your own people”, Fry said, as reported in the Guardian.

“But that a government, something that we elect, something that should be looking out for our best interests, should presume without asking to take information that we swap, we hope privately, between ourselves is frankly disgraceful.”

He added, “Those of us who at the very beginning of the internet had the highest hopes for it, still haven’t lost our optimism; we still think the ability to call our masters to account is incredibly important.”

The day of action has been billed as the largest privacy event of 2014, with over 500 people in attendance at the Shoreditch Town Hall in east London – organised by the Don’t Spy on Us Campaign.


Among the speakers was Wikipedia founder Jimmy Wales, who said, “The tide is beginning to turn as the public comes to understand just how broken the surveillance state is.”

Earlier this year, documents released by Snowden revealed that the National Security Agency (NSA) monitored communications of delegates at the Copenhagen climate summit in 2009.

Other revelations have revealed blanket surveillance tactics that are considered illegal breeches by both human rights laws and international diplomatic laws.

The Don’t Spy on Us Campaign is calling for an inquiry before next year’s general election and will investigate how current laws uphold the privacy rights of the public. In addition, it is demanding new legislation that will make security agencies more democratically accountable to the electorate and elected.