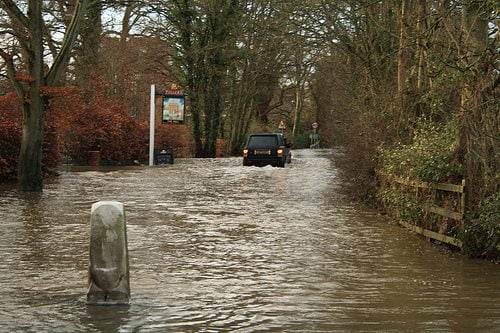 Strong winds and heavy rain have returned to the UK, causing flooding and travel disruption for the second time in a week.

The Met Office has issued an amber warning for winds in north Wales and northern England, forecasting that winds may reach 80mph in coastal regions. Gusts reaching 109mph were recorded in Aberdaron, west Wales, early on Friday morning.

Stormy conditions caused tragedy and severe disruption over the festive period, as five people died and thousands of homes were left without power on Christmas Day.

Now people in affected areas are facing the prospect of a miserable start to the new year as well, as around 13,000 homes are still currently without power. A number of train operating companies have warned of delays across the country while police have warned motorists to use caution, after strong winds have blown many trees onto roads.

Prime minister David Cameron tweeted, “An enormous thank you to the [Environment Agency] and emergency services who are doing an amazing job with the floods and extreme weather.”

However, environmental campaigners have argued that this latest disruption is evidence that government imposed staff cuts to the Environment Agency are a bad idea.

Friends of the Earth climate campaigner Guy Shrubsole said, “With wild weather and floods causing travel chaos, it’s appalling that the government is cutting staff from the Environment Agency who are working to defend the country from flooding.”