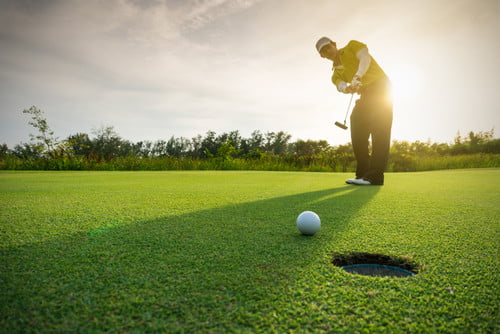 The topic of climate change and global warming is a complicated, divisive one. On one hand, there’s the simple fact that temperatures are rising around the globe, and polar ice is being depleted. But on the other hand, are many different arguments about the causes of this warming.

Many people (especially those whose monetary interests involve greenhouse gas emissions) argue that this is just a naturally occurring warm cycle and in geological time isn’t anything to be worried about. But the scientific consensus is that humans are, in fact, having a negative impact on the climate, contributing to the possibly calamitous warming trend.

Aren’t golf courses lush, green, tree-lined sanctuaries for wildlife? Places to get away from the bustle of the city and spend some time in nature?

Golf courses are actually very controversial when discussing the environment, as there are prices to pay for those lush fairways and manicured greens. But can the sport learn from its mistakes and become a contributor to the solution rather than the cause of global warming?

The Problems With Golf

Among the primary concerns of environmentalists with regard to golf courses are: the use of non-native grasses in golf course construction, elimination or interruption of natural habitats, overuse of fertilizers and pesticides, overuse of gasoline in mowers and golf carts, the massive habitat upheaval inherent in constructing a golf course, and the interruption of natural waterways that may wreak havoc on coastlines.

In Las Vegas, golf courses accounted for 28 of the top 100 water consumers in a 2003 survey. As freshwater in desert areas becomes more and more scarce and wildfires seem to wreak more and more havoc every year, it can be hard to defend the high water demands of golf courses.

In the quest for year-round golf on perfect greens allowing you to practice your golf, many courses are constructed in habitats that aren’t traditionally welcoming to the green grasses that golfers prefer. The deserts of Arizona and Nevada teem with golf courses that interrupt the natural desert landscape with their bright green fairways and greens.

But there’s a movement, spearheaded by the USGA, to update golf course construction and maintenance processes to ensure that golf courses contribute to preservation of local environments rather than interrupting and destroying them. Using grasses local to the area to allow them to thrive without excessive watering is just one step they’re taking.

One of the most notable of these projects was undertaken at Pinehurst #2 in North Carolina. The site of Payne Stewart’s final major victory in the 1999 US Open, Pinehurst #2 is considered hallowed ground by many golfers. So, the Bill Coore/Ben Crenshaw re-construction project in 2011 was viewed with a cautious eye.

Perhaps most controversial was the decision to eliminate all rough. Gone was the traditional 7 inches of deep rough surrounding the narrow fairways. The fairways were widened to create more interesting options and angles, and the rough was eliminated to allow native grasses to reclaim their land. This resulted in fairways surrounded by sandy areas dotted with wiregrass and other native plants and grasses.

The lack of rough meant that much less mowing and watering was required, so they could eliminate over 650 sprinkler heads and revert to a more minimal, eco-friendly center line irrigation system.

While some viewers argued that the native areas were either ugly or too random in their punishments (some players had perfect lies on hardpacked sand while others were doomed with balls that were buried in wiry, grassy mounds), most around the golf world found the reconstruction to be a rousing success, and golf course designers across the globe took notes – perfect to keep improving your swing and properly hit the golf ball.

The Pinehurst renovation is part of a movement among architects to integrate golf courses into the natural surrounding environment, moving a minimal amount of earth during construction and instead focusing on routing through and around existing environmental features. On the way out are massive construction undertakings like Shadow Creek in Las Vegas, which essentially created an entirely artificial world for itself to exist in, and on the way in are courses like the Coore/Crenshaw-designed Sand Hills in Nebraska.

Audobon International is an organization formed in 1987 with the intention of facilitating “the sustainable management of land, water, wildlife, and other natural resources in all places people live, work, and play.”

One of their major focuses is on golf courses, and to that end they’ve created the Audubon Cooperative Sanctuary Program for Golf, which educates superintendents and architects on how to make their golf course friendlier to the environment and a sanctuary for the flora and fauna of the area. They focus on habitat preservation, water quality and conservation, environmental planning, and chemical use reduction and safety.

For instance, putting birdhouses in natural areas that golfers are forbidden to enter can foster growth in local bird populations, which in turn helps control the local insect population. Rather than spraying the course with insecticides, superintendents can rely on birds to keep the pest population down.

And stocking lakes and streams with fish can help control the algae blooms that might result from overuse of fertilization. Of course, using local grasses and better seeding, aeration and mowing schedules can help reduce the need for fertilizers as well.

Final Thoughts: How Can I Help?

As an individual, you may be surprised as how impactful your actions can be. You can start by patronizing golf courses that have the Audubon International Certification. Walking instead of riding in a cart will benefit your health as well as the Earth’s. Or, if you have to ride, try to patronize courses that use electric carts and don’t have paved cart paths.

Don’t be so hard on your groundskeeper if you’re going through a drought and the course experiences some browning. Sometimes you’ll just have to grin and bear it if the conditions aren’t optimal. Remember, it’s a game you’re playing outside and at nature’s whims! The last thing the golf world wants to see is beautiful seaside courses succumbing to rising water levels, so it’s in all of our best interests to preserve the environment, for who among us doesn’t dream of hitting the links with our grandkids someday?

Jordan Fuller is a golf enthusiast with more than 25 years of experience. After visiting lots of golf courses in the United States and seeing beginners struggle with the same mistakes over and over again, he’s set himself on a mission to help as many golfers as possible and created his own blog over at Golf Influence.