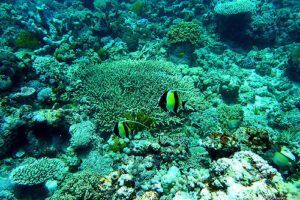 The future of some of the world’s most important natural World Heritage sites was determined yesterday at a UN session representing 192 countries.

The UNESCO World Heritage Committee decided to keep the Belize barrier reef and Selous Game Reserve on the List of World Heritage in Danger. The reef was kept on the list due to continued threats from oil exploration, damaging coastal construction and pollution.

While the decision on the Belize barrier reef recognises commitments by Belize to protect the reef by promising to ban oil exploration in the World Heritage site, the committee asked that such promises be enacted in law.

“We are moving in the right direction with this decision, but it’s a long road to ensure that both the reef and the people who rely on it are protected into the future. WWF welcomes an expert monitoring mission by the end of this year to assess the government’s progress.

An oil spill anywhere within Belize’s waters would have a devastating effect on the reef and on the national economy. We need to prioritise the reef’s long-term value, rather than put at risk its sustainable development potential.”

Last year, the government of Belize announced a policy intended to ban offshore oil exploration within the Belize Barrier Reef Reserve System World Heritage site and a 1 kilometre buffer zone. This effectively should result in a total of 2,117 km2 being protected, but leaves 85 per cent of the country’s waters open to future oil extraction.

WWF calls for a full ban on all offshore oil exploration and extraction to protect the reef and the livelihoods of 190,000 people – half the population of Belize – who depend on it.

Tanzania’s Selous Game Reserve was also kept on the List of World Heritage in Danger with the UN agency calling again for an emergency plan to halt poaching within the Selous ecosystem within a year.

The committee expressed its “utmost concern” over the potential for a number of proposed mining and dam projects to cause damage to the site. Tanzania was urged to abandon plans for industrial activities that are considered incompatible with World Heritage status.

“The potential for Selous to be an engine for growth in southern Tanzania is huge, but the first step on the path to success is achieving zero elephant poaching. We also need an alternative economic future for Selous, based on sustainable development and that would benefit to the 150,000 people who live near the reserve”.

In order for Selous to be removed from UNESCO’s in danger list, WWF is calling for greater effort in combatting wildlife crime, an assessment of the impacts of proposed industrial activities, investment in sustainable tourism infrastructure, and an equitable distribution of benefits to nearby communities.