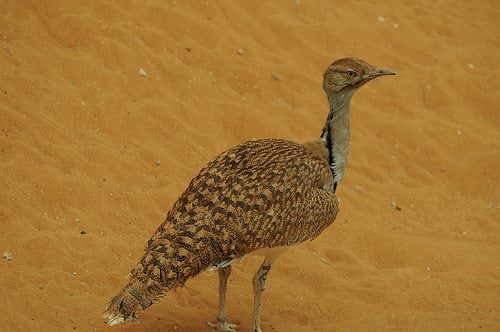 The International Fund for Houbara Conservation (IFHC), an Abu Dhabi-based conservation group, has released 2,000 captive-bred Asian houbara birds into the wild in Kazakhstan. The move is an effort to boost the species, which is under threat from hunting.

The houbara bustard birds have been bred in captivity and transported to three different locations in Kazakhstan for the release – said to be the largest ever operation of its kind.

Some of the birds are equipped with GPS and other tracking devices to monitor them during the adaptation period.

Mohamed Saleh Al Baidani, director of IFHC, commented, “This is a very significant day in the history of houbara conservation. Previously we have only carried out small-scale experimental releases in Kazakhstan in order to learn more about the migration and habits of the Houbara, but a release on this scale takes our efforts onto to a completely new level.”

He added, “Releasing birds on this scale will help to reduce the pressure on wild populations and, over time, build those populations to sustainable levels”.

The news of the release comes shortly after a Saudi prince reportedly killed 1,977 of the endangered birds during a hunting trip to Pakistan – with local conservationists condemning the activity [http://www.theguardian.com/world/2014/feb/04/pakistan-ban-arab-sheikhs-hunting-houbara-bustard].

Bird hunting has been a subject of much controversy in the EU as well over the past few weeks. Plans to shoot 16,000 turtledoves and quails in Malta were contested by Maltese and British conservationists, who claimed that many other species are being shot illegally.