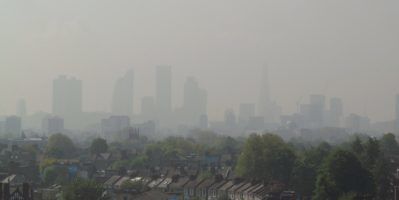 Certain pollutants react with sunlight to create ozone, a toxic gas that causes respiratory complications. Ozone levels are forecast to be ‘moderate to high’ this week – constituting a serious health risk.

But the government does not do enough to promote public awareness of the risk and it goes unrecognised.

The UK has recently come under pressure from ClientEarth and other campaign groups to create a new, modernised Clean Air Act. This comes just as the EU has finalised new rules which aim to limit five major pollutants, including two that combine to produce ozone in sunny conditions.

ClientEarth lawyer Alan Andrews said: “The UK must implement new emission limits as fully as possible, to protect people’s health. Air pollution does not respect national borders, so it’s essential we continue to work closely with our European partners to reduce emissions.

“The government obviously cannot influence the weather, which helps create the conditions for these deadly smogs, but it can and must do far more to tackle deadly air pollution. The best way to do this is by coming up with a new, all-encompassing Clean Air Act.

This spike in pollution is bad news for all of Western Europe, and particularly those who suffer from respiratory illnesses like asthma.

“Without quick and appropriate action to clean up the air, incidents like these will only get more severe, and more dangerous.”

ClientEarth is currently taking the government to court over its continuous failure to protect people from illegal levels of air pollution in the UK. The case is set to be heard on the 18th and 19th October this year in the High Court.

According to a recent report from the Royal College of Physicians, 40,000 people die early as a direct result of dirty air in the UK each year.

Responding to the Mayor of London’s announcement of increased funding for pollution hotspots, ClientEarth spokesperson Simon Alcock said, “we welcome the Mayor’s commitment to tackle London’s pollution hotspots and the much needed support for London’s boroughs. This will help tackle London’s public health crisis caused by air pollution but also needs to be combined with bold policies such as a bigger and better Ultra Low Emission Zone as proposed by the Mayor last month. The government need to stop dragging their feet too. We need a new Clean Air Act that is bold and ambitious so everyone can breathe cleaner air”.