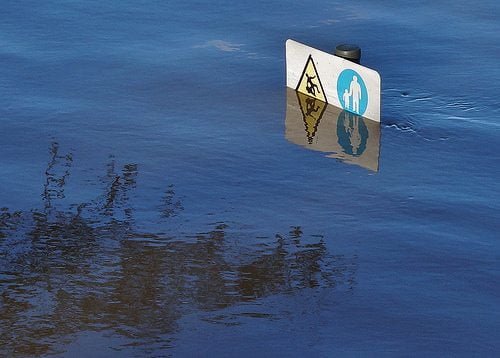 Hundreds of homes have been evacuated overnight in Berkshire and Surrey as water levels along the Thames rise. Forecasters warn that more strong winds and heavy rain are likely to bring further flooding to affected areas.

The Environment Agency has 14 severe flood warnings in place along the banks of the Thames, with two in place in the already heavily flooded Somerset Levels.

The Met Office has issued amber “be prepared” warnings for the south-west of England and southern Wales, where strong winds and more than 30mm of rainfall is expected.

Rail providers are warning of disruption to travel, with some operators telling those in affected areas to travel only if necessary.

Prime minister David Cameron is touring flooded areas, currently meeting with locals in Dawlish, Devon, where a key stretch of railway has been washed away by the sea.

Labour leader Ed Miliband has also been visiting residents in the Thames Valley. Speaking to Sky News from the scene, he said the winter – one of the wettest on record in many southern areas – had been “a wake up call for investment in flood defences that we need.

“Clearly this kind of extreme weather is going to be more likely in the future with climate change”, he added.

“We need to make sure we put in that investment and we put in those flood defences and protection so that we can prevent this sort of thing happening as much as we possibly can.”

The political row over who is most to blame for the lack of preparedness has deepened with the floodwaters, as last night the chairman of the Environment Agency again fended off criticism.

Smith’s comments follow allegations from communities secretary Eric Pickles that the Environment Agency gave ministers bad advice. Pickles – who has taken the place of environment secretary Owen Paterson while he recovers from an eye operation – said that the government should have dredged more often than it has.

According to reports from the Guardian, Environment Agency whistleblowers have revealed that government-enforced budget cuts mean that the numbers of frontline flood staff are being reduced.

“The government is clearly out of its depth and not prepared to face up to a mess of its own creation”, commented Friends of the Earth climate campaigner Guy Shrubsole.

“The prime minister must focus his cabinet on the crucial job of saving people’s properties, businesses and livelihoods. And then, when the floods abate, Mr Cameron must put in place a long-term action plan that protects us all from the threats posed by a changing climate.”