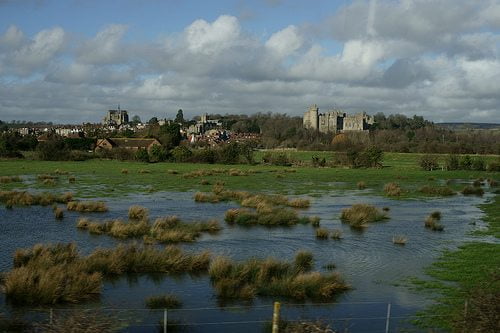 The stormy weather, comprising of heavy rainfall and gale-force winds, is set to continue in parts of Britain for the rest of the week and into the weekend, the Met Office has said.

As forecast on Tuesday, similar conditions have already affected regions such as Surrey, Oxfordshire, Berkshire, Hampshire, Sussex and Kent. The organisation said winds will ease off on Wednesday evening, before another band of extreme weather sweeps across the south on Thursday.

Met Office chief meteorologist Andy Page, said, “This will bring the risk of flooding and damaging winds bringing down trees to cause disruption to travel and power networks.”

Most at risk are coastal communities in the south and south-west. Will Stephens, coastal safety staff officer at the RNLI, said the charity was asking people to take particular care when travelling down the coasts.

“Rough seas and extreme weather might look exciting, but getting too close can be risky”, he warned.

“So respect the water and, in particular, avoid exposed places where big waves could sweep you off your feet.”

A further 28 flood warnings, meaning flooding is expected, are in place in other south-west regions. The south-east, Midlands and East Anglia also have such warnings.

John Curtin, head of incident management at the Environment Agency, said, “Following the wettest January on record for England successive bands of heavy rain are forecast, lasting into the weekend.

“With further river and coastal flooding expected this week we have teams working around the clock to protect homes and communities, and over 122,600 properties have been protected over the past three days.”

The latest flood warnings come as the government’s official climate advisers, the Committee on Climate Change (CCC), warn that the UK must spend an extra £500m over the next four years to prepare for the increased risk of flooding brought by climate change.

“Flood damages are expected to increase across the UK. Scientists are becoming bolder in attributing recent weather events and flooding to the level of global warming already observed”, Daniel Johns, head of adaptation at the CCC told the BBC.