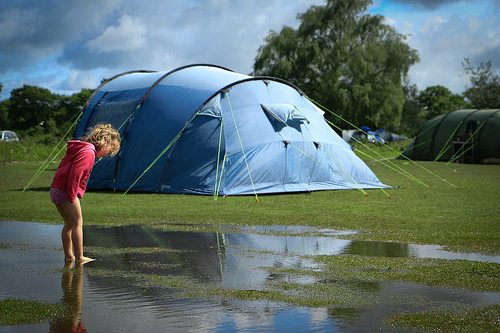 Alerts remain in place in parts of England, with forecasters warning that sharp downpours could lead to localised flooding in the Midlands, south-east, south-west and north-east over the weekend.

The Environment Agency issued flood alerts, meaning flooding is possible, for almost all of England and Wales in midweek. While many have been removed in the last 48 hours, nine still stand.

The organisation said in a tweet that it expected to see “isolated torrential downpours” in some regions on Saturday.

Meanwhile, the Met Office has told people all over the UK to “be aware” of potential flooding this weekend, issuing almost all of England and Wales with a yellow warning.

Its chief forecaster said, “Warm, humid air will be pulled northwards from France and Spain late on Friday and during Saturday. Within this air mass, there is an increasing likelihood of heavy, thundery downpours breaking out.

“It is likely that many places within the current broad warning area will miss the worst of the storms, but it will prove difficult to highlight the areas most at risk until nearer the event itself.”

Lord Deben, former Tory environment secretary, spoke out this week about the impact the UK’s floods have had on inspiring people to act against climate change.

He said, “It’s more and more clear to people that the weather patterns which we were warned about turn out to be happening. I think in this country the floods had a real effect, and there will be other things.”

For the latest updates on flood warnings and alerts, visit the Environment Agency’s website.