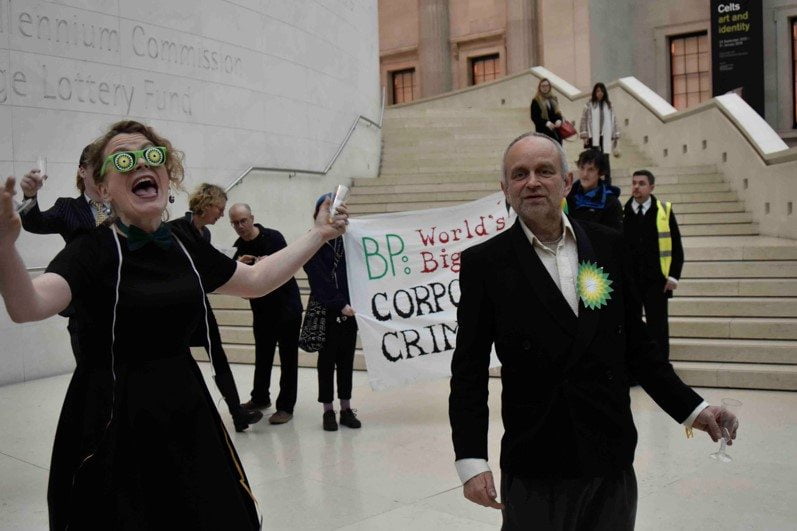 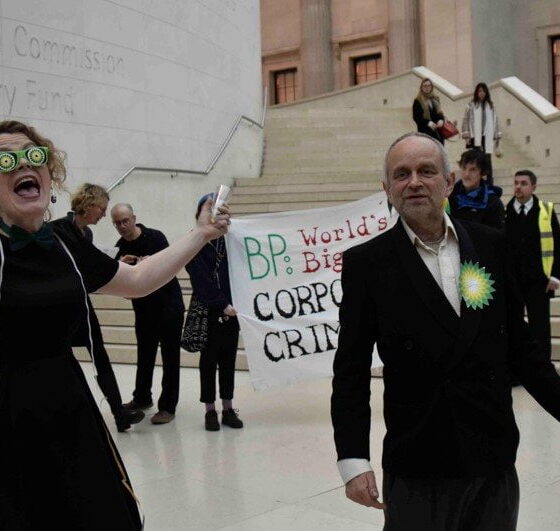 On Sunday 20th December, a group of 25 “actor-vists” dressed as BP executives hosted a fake farewell party inside the British Museum’s Great Court, marking the departure of the museum’s director, Neil MacGregor, and the end of his “cosy relationship” with the museum’s sponsor, BP.

The theatre group behind the protest, BP or not BP?, have obtained emails under the Freedom of Information Act revealing “cosy” relationships between BP staff and the museum’s director and the British Museum will soon decide whether to renew its 5-year sponsorship deal with the oil giant. The protest comes just a week after 10 performers were arrested at the Musee du Louvre during the Paris climate talks, when they challenged the museum’s sponsorship by the oil companies, Total and Eni.

Rhiannon Kelly, one of the performers taking part in Sunday’s performance, said: “The Paris climate deal has made the direction of travel clear – we must shift to a fossil free culture. So, when the British Museum decides whether or not to renew its sponsorship deal with BP, it must be ethics and the future of the planet that determines the outcome – not personal relationships. Rather than just preserving cultural artefacts, the British Museum should be in solidarity with the communities and cultures around the world that are already facing the impacts of climate change.”

The protest performance began when a group of vocal “BP executives” arrived in the Great Court, singing a rewritten version of Robbie Williams’s classic song, ‘Angels’: Through all the oil spills / And even our court cases / Neil [MacGregor] wouldn’t forsake us / Art sponsorship will save us / We’re loving culture instead.

A performer, playing the part of the departing museum director, joined the cast and was then showered with oily “champagne”, a “world” cake and dirty money. The performance highlighted the hypocrisy of the most recent BP-sponsored exhibitions and events at the museum, including Indigenous Australia: Enduring Civilisation and the Mexican Day of the Dead festival, both of which encountered protests made in solidarity with Aboriginal and Mexican activists respectively. The “BP executives” also poked fun at the title of the next BP-sponsored exhibition, the ironically named Sunken Cities.

Following a Freedom of Information request, 19 pages of emails between BP and the museum’s outgoing director from January 2014 to January 2015 were released. Among opera and dinner invitations is an email sent by Neil MacGregor to a departing member of BP staff on New Year’s Eve 2014 at 6:39pm, which included the following lines:

“I have very much enjoyed every aspect of our cooperation, and have always known that we were working towards the same end…”

The protest came just a week after 10 arts activists were arrested in the Musee du Louvre in Paris while creatively protesting the museum’s sponsorship deals with the oil companies, Total and Eni. Meanwhile, hundreds of climate campaigners had gathered outside the museum’s iconic glass pyramid, revealing umbrellas displaying the words ‘Fossil Free Culture’. It marked the coming together of a movement of artists and activists working to liberate museums and galleries from unethical corporate influence. Earlier this year, 36 leading climate scientists wrote an open letter to American museums and galleries, urging them to break their ties with the fossil fuel industry.