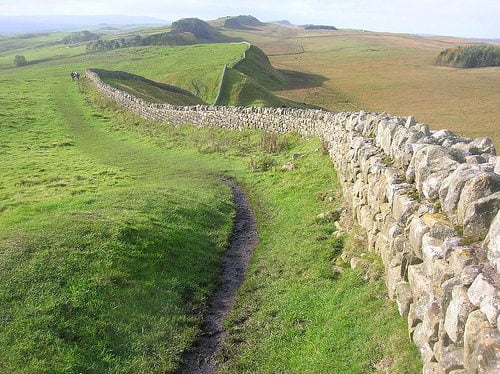 Hadrian’s Wall Path became the 15th national trail in the UK in 2003. It runs for 84 miles through the north of England, going from coast to coast, from Wallsend in the east to Bowness-on-Solway in the west, meandering alongside the remains of Hadrian’s Wall.

Some of the path runs through urban areas, including the centre of Newcastle, though most of it traverses remote – but flat and easily negotiable – farmland and countryside.

The path’s obvious attraction is its namesake; the remnants of the 73-mile wall built on the order of the Roman emperor Hadrian between AD 122-128. It is one of the most popular tourist attractions in the north of England, and was named a World Heritage Site in 1987.

Although it is often thought that the purpose of wall was to – as Hadrian’s biographer put it – “separate the Romans from the barbarians“, historians have suggested a number of alternative reasons for its construction. Some suggest that the wall was used instead to control immigration and customs, while others say it was simply an extravagant symbol of Roman might.

Much of the wall has now disappeared, as over the centuries much of the stone was looted for use in new buildings and roads. It is, however, not all that is left of the Roman legacy. Many forts and ruins still remain. Birdoswald is a particular highlight – offering a family day out with interactive displays and artefacts.

If you live near Hadrian’s Wall and are interested in ethical investment, read The Guide to Sustainable Investment 2013 for more information, and The Guide to Ethical Financial Advice 2013 to find a specialist ethical financial adviser near you.