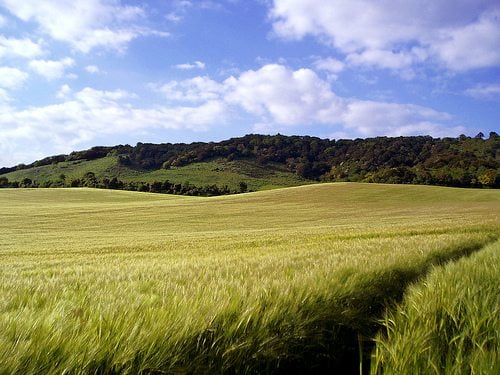 The North Downs Way national trail is a long-distance path that runs 153 miles though southern England, from Farnham to Dover.

Opened in 1978, the path weaves through the ancient woodland of the Surrey Hills and the rich grassland slopes of the Kent Downs, two official Areas of Outstanding Natural Beauty.

Negotiating the whole of the trail should take around 12 days, though the more causal walker can easily enjoy its shorter segments separately.

The path takes its visitors past many tourist attractions of literary, artistic and historical significance. Highlights include Canterbury Cathedral, Dover Castle and the remains of Waverly Abbey. In many places the national trail follows the route of the historic Pilgrim’s Way – the path supposedly taken by pious travellers from Winchester to the shrine of Thomas Becket at Canterbury.

The scenery of the North Downs has also inspired such varied luminaries as JMW Turner, Aldous Huxley and Jane Austen. Charles Darwin lived near the path, and, after his voyage through the Galapagos, mulled over his theory of evolution while observing the North Downs’ slightly less tropical fauna.

If you live near the North Downs Way and are interested in ethical investment, read The Guide to Sustainable Investment 2013 for more information, and The Guide to Ethical & Sustainable Financial Advice 2013 to find a specialist ethical financial adviser near you.