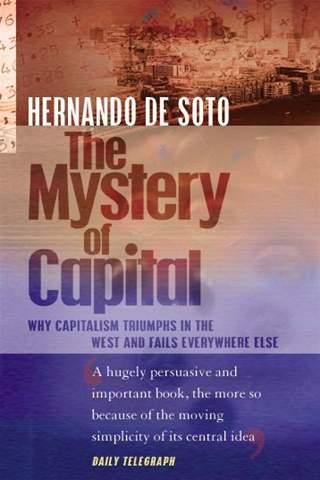 Peruvian economist Hernando de Soto explains what capital is, why it has failed to benefit the majority of mankind and sets out an alternative solution in The Mystery of Capital: Why Capitalism Triumphs in the West and Fails Everywhere Else.

As a result capitalism could benefit all of human kind, rather than just one-fifth as it currently does, if this approach was taken, he argues. However, Western thinkers have often blamed the failure of capitalism in developing nations on a lack of sellable assets or an inherently non-entrepreneurial mindset, and as a result the crux of the problem has not been addressed.

Whilst the subject matter of the book is complex and typically tedious, the author makes it interesting and thought-provoking. Research is used to detail struggling economies around the word to support the claims made in the book, leading to the reader thinking why hasn’t more been done to address this issue.

The Mystery of Capital gives an enormous insight into capitalism, its benefits and pitfalls, with a convincing explanation and a revolutionary path for the future.