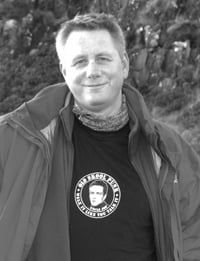 Ethical investment: money with a voice

Despite how far it’s come, though, Julian Parrott still thinks there is a “fear of the unknown” in terms of knowledge on the sector. But then again, that’s why professionals like him are here – to completely turn this belief around and make the unknown, known.

“I think what’s really stopping [ethical investment from taking off in the UK] is a wide range of accessibility”, Parrott says.

“You can get a lot of advice from somebody like me, but you need to be able to access me first.”

Parrott is a partner at Ethical Futures – an Edinburgh-based group of independent financial advisors, but it was whilst working for financial advisors Towry Law and Sedgwick, that he first dipped his toe in the ‘ethical’ water.

“At the time it was quite difficult,” admits Parrott.

“If you worked for a big company, you had to work from a panel, and that was quite limiting, so I started to investigate [ethical investment] more and found it quite interesting.”

Disenchantment with working for large-scale national companies, and the desire to pursue his interest in ethical investment, coincided with an opportunity arising at an ethical IFA in Edinburgh.

So he formed Ethical Futures with Martin Wight in 2005. He then went onto recruit an industry-experienced team of three people, made up of a practice manager, a paraplanner and an administrator with a compliance responsibility, and set up base in Edinburgh, where Parrott already worked.

“I couldn’t say this as a definitive, but [Edinburgh has] got a fairly liberal approach and a fairly high content of education, professionals and NGOs,” Parrott explains.

“Without stereotyping our client-base, there are probably a higher proportion of immediately accessible clients for our business here.”

Connecting people to their money

When it comes to investing ethically, though – the main mantra of Ethical Futures – Parrott believes there are two elements as to why people should consider it.

“More importantly, I think, especially given all the things that are going on at the moment on the back of the financial crisis, is that it’s just another mechanism to try and connect people a little bit more to their money.”

The crux of today’s problems, Parrott says, stems back to the 1970s, when monetarism and globalisation were at the top of government agenda.

When asked who he would choose to be stuck with on a desert island, he chose former Labour MP and Secretary of State for Industry and Energy in the 1970s, Tony Benn.

“He was in government through quite interesting periods of time in the ‘60s, ‘70s and ‘80s,” Parrott explains.

“He approaches technical issues with a strong social perspective and I think it would be interesting to consider his ideas on the current global crisis.”

Many people claim that to invest ethically, a compromise has to be made in terms of financial gain and your morals.

This, according to Parrott, though, is not the case.

“I don’t think there’s specifically a compromise, but what there is, is probably a variant to short market performance”, he says.

“I think the cycle that ethical investment funds tend to perform on is somewhat different from that which mainstream funds have, but I’m confident that medium-to-longer term performance is not adversely affected.

“If you’re comfortable to compromise your personal decisions and values to make an investment return, then good luck to you, but if you don’t, then I think you work within those environments, and I think people have aspirations for the investment to be a bit more than just its financial return.”

Ethical Futures currently offer a combination of fees and commissions, but within the next few months will be adopting a menu-driven, fee-based approach to advice.

Parrott picks out three companies who offer good investment opportunities, including Ecclesiastical, saying “the nature of their funds are very positive in their outlook”, Kames Investment, and Jupiter Ecology, but he says, “Any financial advisor should have a spread of different assets and different mixes.”

Although there is evidence that shows a growth in ethical investment, the sector is, relatively speaking, still fledgling.

Parrott, though, issues a warning to people who don’t currently invest ethically, highlighting the biggest consequence for them and stating how socially responsible investment has the ability to allow you to fully control your finances.

“They will continue to be disempowered by their investments – they will be an onlooker just looking for the investment to try and make a return.

“When you’re an ethical investor, you start to have an involvement with how the money is managed.

“You can sit on the sidelines and moan about the bankers all the time you like, but if you actually invest in a company that actively manages and engages with businesses as to how they remunerate senior employees, then you’re starting to take a step into responsibility.”

But what’s in store for ethical investment in the future?

“I’d dearly like to see more money with a mandate or a voice”, urges Parrott.

“Ethical investment has a degree of voice.”

If you want to find out more about ethical investment contact Ethical Futures or complete our online form so we can connect you with a relevant local advisor.

Ethical Futures is based in Edinburgh, the capital of Scotland and the country’s second-largest city behind Glasgow.

The city is perhaps most famous for its annual festival, the Edinburgh International Festival and the Fringe – the largest of its kind in the world.

But it is also well known for its New Year celebration called Hogmanay, its vibrant culture, and its spectacular castle which dominates the skyline above the city.

The City of Edinburgh Council, covering Edinburgh and 30 square miles of the surrounding area, is led by Jenny Dawe, whilst the Lord Provost of the capital – a similar role to mayors in England – is George Grubb.

The Council has set up a Sustainable Development 2020 plan, which “details a framework for action which will be embedded into all Council policies, programmes and services; but recognises that, for the city to develop sustainably, a wider range of actions involving all individuals, organisations and sectors of the city working together is required.”

Per capita, Edinburgh’s emissions – from the burning of fossil fuels – from that year, were below the national average, which stood at 7.4t, whilst the Scottish capital’s score was 6.4t.