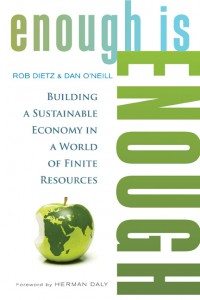 Enough is Enough argues that the current economic model needs to change in order to respond to the challenges we face, including impacts on the environment and social needs. The film is a supplement to a book of the same name and looks at the arguments for change as well as solutions.

One of the key points the film makes is that rising GDP doesn’t necessarily mean that things are improving. Andrew Simms from Global Witness says, “One of the problems with growth as a measure is not what it does tell you but what it doesn’t tell you.”

GDP fails to factor in wellbeing, such measures of happiness, education and life expectancy, and as a result should not be used as a measure of national progress, the film says. It also points out that negative events, such as oil spills, crime and war, contribute to GDP as money is spent even though the effects can negatively impact on quality of life, resources and the planet’s health.

Dan O’Neill from the University of Leeds, a co-author of the Enough is Enough book, states, “Growth is not sustainable due to environmental limits and its no longer desirable in wealthier nations as it’s no longer improving lives, the questions is what to replace it with.”

The film proposes an economy that doesn’t focus on consumerism but stability – choosing quality over quantity and optimisation over maximisation. In the solution proposed, the goal is not to improve GDP, but to improve people’s lives.

Enough is Enough covers three other issues – debt, inequality and unemployment – and provides proposed measures to resolve them. Accompanying the speakers are cartoons by Manchester-based political cartoonist Polyp.

It is a short film, at less than 19 minutes, and it speaks to a wide variety of experts who explain complex arguments in a simple way. It is engaging and will leave viewers considering the adverse effects of continually striving for growth.