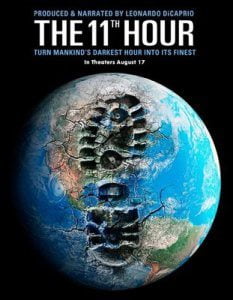 The 11th Hour is a documentary created, produced and narrated by Leonardo DiCaprio about the state of the natural environment. This comprehensive film looks at the issues we have created and presents the outcome.

The 11th Hour demonstrates how all aspects of the environment overlap and how actions can cause a ripple effect leading to serious indirect consequences. Global warming, deforestation, depletion of the oceans habitats and species extinction are all addressed. It uses hard facts to demonstrate the severity of the situation and paints a bleak picture of the future if nothing is done.

The film contains contributions from over 50 politicians, scientists and environmental activists, including big names such as David Suzuki, Stephen Hawking and Wangari Maathai.

In addition, the film presents potential solutions to the problems discussed and calls on people to act and rethink their activities. The proposed solutions show that it is not to late to act and creating sustainable consumer capitalism can reverse climate change.

Despite being aimed at an American audience, the message is beneficial to everyone. Although The 11th Hour isn’t groundbreaking, the clear viewpoints of professionals along with the informative evidence presented make this worth watching.