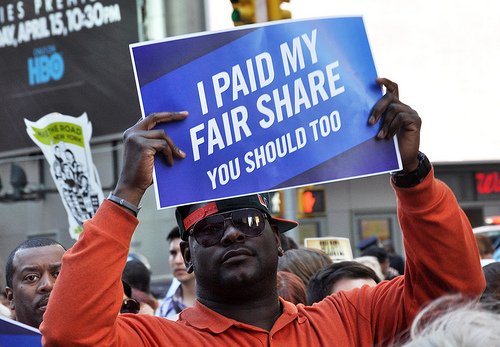 News broke recently that Amazon pays just £2.4m tax on £4.2 billion sales. Meanwhile, the public accounts committee hauled Google in to explain its tax position. With corporation tax, the primary problem is not the players (companies) or even the referee (HMRC), but instead, those who create the rules (politicians).

People are angry about tax, legitimately so.

Most people and companies pay the tax that they are required to. We might not like it. We may complain. We all have opinions on the scope of government and how it could become more efficient. Nevertheless, we are happy to benefit from secure borders, a healthy, educated, law-abiding population and relatively good infrastructure.

People can rightly condemn the ethics of companies that aggressively avoid tax. Regardless, tax avoidance is legal within certain limits.

The big four accountancy firms, PricewaterhouseCoopers, Ernst & Young, Deloitte and KPMG, deserve some criticism for enabling aggressive tax avoidance. Parliament reported, “The four firms employ nearly 9,000 people and earn £2 billion from their tax work in the UK, and earn around $25 billion from this work globally […] In the area of transfer pricing there are four times as many staff working for the four firms than for HMRC.”

People are justified in condemning HMRC for entering into backroom sweetheart deals with major corporations that let them off their tax obligations.

All the parties above deserve a kicking from members of the public for their lack of ethical constraint. It is rich for the media to condemn them when everyone from the Guardian through News International (the Sun and Times) and the FT has a level of engagement with tax havens or partnerships with businesses that use them.

If you create a legal system that allows complex tax avoidance schemes to flourish; if you operate a revolving door between tax accountants and tax policymakers; if you underfund HMRC so it cannot operate or investigate abuse effectively; do not be surprised if companies avoid tax.

The combined turnover of UK businesses at the start of 2012 was £3,100 billion and corporation tax was £44 billion.

In effect, the tax on all UK business turnover is just over 1.3%. Amazon paid only 0.06% of its turnover or a tiny fraction of everyone else’s. Amazon’s ability to undercut traditional retailers seems to be more down to how little tax they pay rather some brilliant business model or leadership.

But what is the solution is here?

The government could massively beef up HMRC and use the law as it stands. In 2011, HMRC budget was £3.8 billion and it raised £474 billion in tax receipts. That is not a bad return on investment. It might be worth increasing that by a few million to secure more of the tax revenue that is aggressively avoided.

You could move tax on corporations from flexible profit to actual sales. Scrapping corporation tax and increasing VAT, an unavoidable tax on sales, would be one way to do this but might dampen the fragile economy. VAT is also highly regressive, as it tends to hurt the poorest most.

– VAT goes up to 28.1% – or less if spread over products and services that are currently zero-rated

Both the above approaches would have significant fallout and unforeseen consequences among the accusations of naivety. They would not work for companies that make a loss.

Of all these, we prefer strengthening HMRC and giving it the resources to investigate and prosecute companies that avoid tax.

If our membership of the EU is going to harmonise anything, it should not allow EU tax jurisdictions like Luxembourg to have a headline corporation tax rate of nearly 29% but then charge only 5.7% on intellectual property and royalties – one of the biggest areas of transfer pricing. VAT differentials are also used.

Finally, if companies avoiding tax annoys you, boycott them. According to ActionAid, only two FTSE 100 firms do not use offshore subsidiaries to avoid tax, and a quarter have headquarters located offshore.

The last culpable party in this is us as consumers. If we choose not to shop at those who avoid their responsibilities to society, they will soon change their ways. In the meantime, we will give a big boost to competition, which is good for everyone.