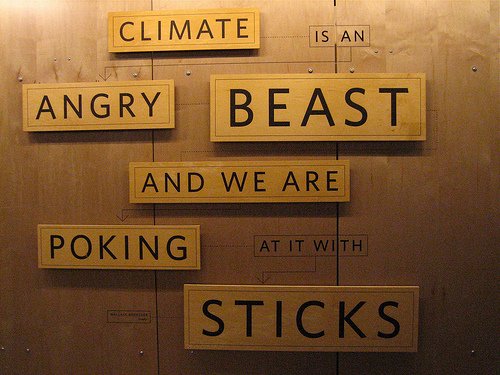 Newsflash: science is complicated. A lot of jobs, being a politician or columnist for example, can be mastered with very little hard work. This is not true of postgraduate science. Obviously natural flair matters and the best of those two aforementioned ‘professions’ have that flair in spades. But science is different.

Science is seriously complicated. While natural flair for a scientific subject still helps, put simply, you need to undertake years of dull, painstaking and patient research and analysis. To master science you need to be willing to fail or be proved wrong and have your findings brutally taken apart by your most respected peers, in journals that all of your colleagues will read.

One of the more complex areas of science is climatology.

No amount of classics, literature, economics or business education, even at a leading public school or university, can equip you with the detailed knowledge you need to understand fundamentally the climate. After all, it is not simply the weather.

The climate is a truly global, non-linear, highly interconnected, hard-to-model-and-predict feedback system. It extends from the exosphere (600km up) to the bottom of the deepest ocean trench (going down to 11km). That’s an awful lot of gas and liquid. It is explicitly not the arena for uninformed opinion, idle speculation or enthusiastic amateurism.

Almost all – 99.83%, to be precise – peer-reviewed climate research papers agree that carbon dioxide from human activity is affecting the environment, leading to global warming.

There is a small group of politicians and commentators however, especially those of a narrow educational background (Eton, Oxbridge/Buckingham) and economic philosophy (neoliberalism), who endlessly wax lyrical about the terrible conspiracy of an ‘environmental Taliban’ that is against economic growth.

Their central argument has subtly shifted from denouncing human-caused (anthropogenic) global warming as a myth, to the perverse argument that the warming has no discernible negative impact. Residents of places as diverse as Greenland, New York and Bangladesh may beg to differ.

They also couch their argument in seriously out-dated economic terms, seeing any sustainable initiative or project as a socialist plot to undermine their beloved and, ideally, unfettered capitalism.

They ignore overwhelming and peer-reviewed scientific evidence. They conveniently forget that fossil fuels consume more subsidies than renewables. They conveniently ignore the massive health affects and related costs of burning fossil fuels, regardless of climate impacts. And they conveniently overlook the fact that their economic philosophy’s founding fathers understood the importance of a country’s moral sentiments and the negative externalities (e.g. pollution) of markets.

Their faith in the markets is absolute. Their dogma is carved in tablets of stone through everything they think, say or write. They see their opinions and conclusions as vastly superior to millions of dollars of climate modelling technology and thousands of man-years in PhD-level climate research internationally. They are never wrong, nor will they admit they are ever wrong.

This has happened before with tobacco. A narrow clique of corporate tobacco leaders and their well-funded friends in academia, politics and the media hoodwinked the population into believing that smoking has no causal link with cancer.

They argued that the other side of the debate were nanny-state, anti-capitalist, interventionists. We now know better as do the millions who have suffered from believing them, but this was aggressively resisted by those vested interests. It still is, and birthed a political movement.

This is now happening over climate change and renewable energy. The corporations have a simple rulebook. First they must encourage academics, politicians and the media to rubbish the science and then rubbish the reputation of those conducting independent research or running enterprises in this area.

They must then suggest that the motives of those scientists and entrepreneurs are selfish and financial (grants and subsidies) without mentioning their own financial interest in the debate.

Finally, it is also important to create a grassroots movement so this is not seen as a corporate action. Once you have your academic, political and media ducks in a row, distribute your disinformation (being wrong intentionally) as widely as possible and hook it to other topical issues that people care about. This then becomes the accepted wisdom (or misinformation – being wrong unintentionally).

Online and newspaper filter bubbles go on to create a feedback loop of reaffirming misinformation and building an apparent, but wholly manufactured, intellectual depth to the scepticism.

Do not misunderstand this. As a magazine we, and many other investors, see a genuine economic opportunity in this crisis. New clean industries create jobs, reduce pollution, increase energy security, deliver valuable exports and deliver disruptive competition for incumbents. We are not afraid to declare publicly that our motives are, in part, economic.

However, sustainability is the art of balancing the needs of the economy, ecology and society. Capitalism, when channelled responsibly towards sustainability, is one of the most powerful and beneficial change agents we have at our disposal. Giving billions in subsidies to supposedly efficient and well-established oil and gas companies is not sustainable; nor is it capitalism.

The first question that should ever be asked of someone writing about the climate is, “Are you a climatologist?”

If the answer is ‘no’, and unless they are plainly and honestly reporting what climatologists say, then move along; there is nothing useful being added to the debate – other than misinformation  or disinformation. Both are often paid for by those with a huge financial interest in the science being proved wrong.

If you want to understand the law, you talk to a lawyer. If you build a bridge, you engage an engineer. If you want to understand history, you talk to an historian. If you need brain surgery, you engage a brain surgeon. Ideally good ones. You do not ask a columnist or politician. The same surely applies to our fragile, precious and essential climate.

You certainly don’t listen to, or give column inches in previously authoritative broadsheets, to censured ‘interpreters of interpretations’. Dishonesty, polemicising and over-simplification are not the hallmarks of good journalism for the informed debate we need.

It is genuinely time for the enlightened and educated grown-ups to really lead the debate and tackle the myth-spreaders. That includes you.