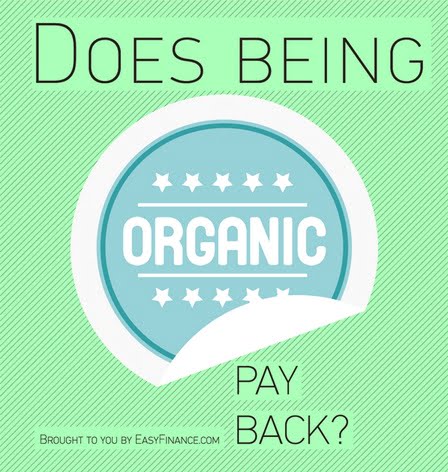 Infographic: does being organic pay back?

Online consumer portal, EasyFinance.com, has produced a very interesting infographic about being an organic shopper, and whether it pays to buy products of this type.

Called Does being organic pay back?, the graphic looks at a number of different areas, including sales, cost and manufacturing.

It begins by charting the meteoric rise of organic food and drink, saying that annual US sales have grown exponentially, from $1 billion in 1990 to $26.7 billion 20 years later in 2010.

It was announced earlier this year that UK sales of organic food had dropped by 3.7% in 2011, as supermarkets across the country opted to cut back on own-brand organic products. According to the Soil Association, this meant that a total of £1.67 billion was made from the sales of organic food last year, compared to £1.73 billion in 2010.

However, globally, things look much brighter. International organic sales exceeded £37 billion in 2011 – an 8% increase of the previous 12 months.