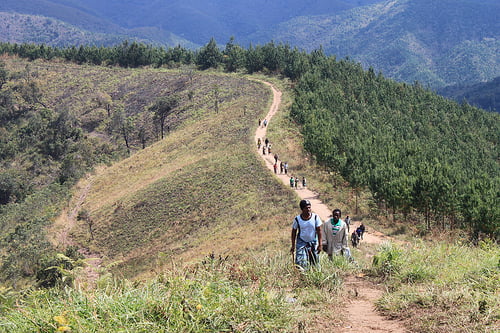 Not to be confused with Cornwall’s famous tourist attraction, California’s innovative Eden Projects is firmly of the opinion that planting trees can save lives. And in the midst of various struggles for environmental and ecological progression, it emerges as an inspirational solution.

Evan Hunt, who works for the project, spoke with Blue & Green Tomorrow in an appeal for individuals and small businesses to realise that they can still make a difference.

“The world keeps waiting for the big boys – governments and giant corporate groups – to resolve our problems”, he says.

“We believe it’s time for the average person to step up and do something to take action. It’s urgent.”

Steve Fitch, Eden president and founder, spent much of his childhood exploring natural wonders in the Philippines. When he decided to visit in 1997, and again in 2001, he was shocked by the devastation that had taken place in his absence.

The barren landscape that was once flourishing blankets of rainforest found Fitch at a new level of recognition; there was a link between social decline and environmental decline.

The relationships between trees, as it were, and the prosperity of the local community was one which Fitch saw to directly coincide. On his travels, the ‘urgency’ of this ecological domino was becoming ever-more apparent.

After years reeling over diminishing rainforests and similarly affected communities, and believing, wholeheartedly, in a sustainable solution, Fitch was met with the proposition that sparked it all. In fact, he was handed an invitation by Halle Marian, president of the Southern People’s region of Ethiopia – “Would you be willing to take over a defunct reforestation nursery?” His answer was “Yes!”

Deforestation: the Power of Multiplication. Image: The Eden Projects.

Since 2005, The Eden Projects has employed thousands of workers in Ethiopia, Madagascar and Haiti who, in turn, have helped their surrounding areas to flourish to at least an echo of its former glory. In this, millions of seedlings have been planted, setting down lasting roots not only benefiting the local environment but also providing resources for communities in the long run.

“We plant there because both of these nations are among the 20 poorest in the world; they’re suffering. The overt connection between environmental destruction and poverty are displayed in those nations. Steve has great connections in these countries and has knowledge of the infrastructure to make it happen.

“We enforce the idea and the vision by working closely with every level of government and especially the local elders and villagers.”

In their efforts to support sustainable ecosystems and ensure that their forests are permanent, the organisation aims to follow five principle steps: work closely with local government and elders to make sure that the land we plant on is set aside for long-term use; hire local people to do the work; 10% of trees are agroforestry trees (trees for human consumption); hold locals accountable to agreements; and hire guards to protect the trees.

Reforestation: the power of multiplication. Image: The Eden Projects.

Notably, one of the most influential movements to take off from the unique platform is Eden’s Power of 10 campaign. Encompassing the belief that the individual, and the small business, can make just as substantial a difference as major governing bodies, the Power of 10 works on the principle that a donation of $10 provides employment to plant 100 trees; invite ten friends to do the same and, together, you have employed ten people and planted 1000 trees.

“We’ve always believed the average citizen, the average person, is the solution to the global environmental crisis”, says Hunt.

“We have a vision that if we can find 1m people to donate US $10 a month, as well as one thousand small businesses to donate $10 to $1,000 a month, we can reforest entire nations in our lifetime.

“Most people don’t understand that radical deforestation is the driving force behind much of the social chaos in the modern world. Look at Darfur. Because of climate change, you’ve got the Arabic North moving south into pastureland, causing total chaos and even bloodshed.”

The Eden Projects efforts’ to restore ecosystems and provide jobs for developing communities is on the brink of an overwhelming milestone. As the 45m mark peers over the horizon for number of trees planted, live stats on the organisation’s website also teeter on the edge of the 450,000 point for the number of work days that have been created so far. In fact, Fitch’s view of reforestation is surely becoming a promising reality.

The Eden Projects believe that “people can make a difference“, and at a point where the company’s ethos is visibly shining, perhaps we should be thinking about what we can do as individuals, rather than relying upon preoccupied governments to combat the effects of climate change.

Putting the ‘green’ in our blue and green future: the story of an ‘inspirational’ ethical fund