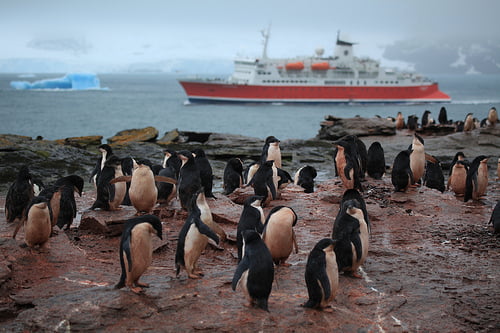 New Zealand’s prime minister is set to travel to Antarctica this week; following the lead of an around 50,000 people who venture to the continent for holidays each year. Some call it ecotourism, but is it really responsible to visit such pristine landscapes for a jolly jaunt?

Last year, we were presented with some rather disturbing figures. Sea ice cover in the Arctic – one of the few untouched landscapes left on Earth – had reached its lowest ever level.

In the months that followed, similarly worrying news fed polar researchers’ concerns. The Antarctic was revealed to be melting twice as fast as first feared; MPs published a report urging a halt to oil drilling in the Arctic; and famous faces spoke out on preserving marine ecosystems in polar regions.

The Arctic and Antarctic were once places of great discovery and mystery; now they’re vanishing before our very eyes.

But in an attempt to see these landscapes – perhaps for the first and last time – an increasing number of individuals are flocking to the two continents for luxury, ‘eco’ holidays. But there are growing calls for all unnecessary travel to the icy regions to be scaled down.

“The Antarctic environment is harsh and forbidding, yet is susceptible to damage from human activities compared to warmer environments”, said Ricardo Roura of the Antarctic and Southern Ocean Coalition (ASOC), and author of a recent article on the subject of Antarctic tourism published in the journal Polar Research.

“Regular pedestrian approach may affect wildlife in a number of ways, including stress reactions, reduced recruitment and population abundance, (apparent) habituation and relocation to other sites.

“Tourism visits may also result in features such as footprints, tracks, lost or discarded objects and the introduction of non-native species.

“Concerns about Antarctic tourism include not only impacts on environmental, scientific and other intrinsic values of the region but also implications for search and rescue, and broader effects on the Antarctic Treaty regime vis-à-vis jurisdictional questions.”

Claire Christian, director of ASOC’s secretariat, added, “Antarctica is the world’s last great wilderness, and belongs to all humanity, so we have a special responsibility to protect it.”

Reporting on the news that prime minister John Key was set to make a trip to Antarctica himself this week, The New Zealand Herald wrote that tour operators “must prove they have only a minor impact on the environment”.

This is not good enough. Visits to the polar regions should be limited to scientific researchers only; and if travellers want to splash out thousands of pounds to see the landscape for themselves, shipping standards should be a lot stricter. Far higher than ensuring they only have a “minor impact”, that’s for sure.

Some even suggest auctioning off the rights to visit the Arctic and Antarctic – a suggestion that would help to create a more sustainable tourism industry in these places, but turn them even more into playgrounds for the wealthy.

One of the major justifications of travel at the possible expense of the environment is the benefit that tourism brings to local, often poor, populations. But given that there is no significant local population in either of the polar regions, this defence can’t be used. There is no indigenous population in Antarctica who will benefit, apart from the penguins.

However, for globetrotters who have their mind set on getting an icy fix the next time they’re booking a holiday, there is a solution to this problem.

The developed world boasts similarly awe-inspiring glacial regions such as Iceland, Alaska and Greenland. While they too are feeling the effects of climate change heavily, unlike the polar regions, they’re more accustomed to humanity’s footprint and it’s much easier for individuals to benefit the local populations on their trip.

The rapid decline of ice in both the Arctic and Antarctic is perhaps the greatest single piece of visual evidence for climate change – see Chasing Ice – and thus, the Western world’s reckless behaviour in polluting the Earth.

If these beautiful, vulnerable places are being impacted so devastatingly by gases that are emitted thousands of miles away, it seems unwise and irresponsible to continue to flock there in numbers for the sake of seeing a penguin close-up.