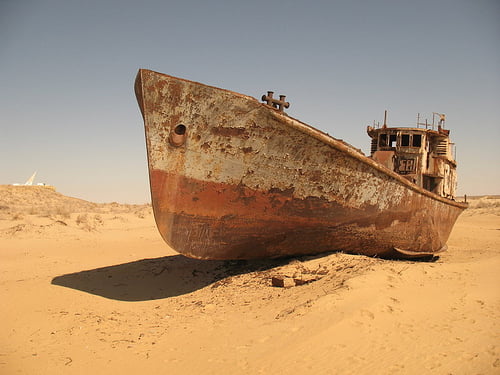 The Aral Sea: a prime example of human recklessness

Twenty-two years ago, the Aral Sea was creating attention as its fresh water level dropped by two-thirds. To this day, that number is above 70%, causing many to consider it as the most mismanaged water resource in human history. Joseph Iddison explores its history and future.

The Aral has become infamous for its sea-turned-desert existence, with historians and environmentalists placing it among the worst ecological disasters ever.

Casting back, it seems rather improper and reckless that such an area of aquatic history – previously the world’s fourth largest inland sea – was allowed to diminish.

In the 1960s, the Soviet Union built large pastoral dwellings for farmers, digging long canals to irrigate them. When this farm boom began, the Aral had a commercial fishery that brought in more than 40,000 tonnes of fish each year. Thousands of fishermen worked the Aral, and others found jobs in processing plants, canneries and railroad yards, where train cars full of fish left daily for markets in Moscow.

However, this changed in the 1980s, after the Soviet government drained the Aral in order to supply cotton fields planted in the landscape around it, specifically in Uzbekistan and Turkmenistan. Once a colossal geographic feature, covering 26,000 square miles, the Aral shrank to just one-tenth of its original volume.

In the late 1980s, the Aral divided into two parts, becoming what is commonly known as the North Aral – small but moderately deep – and the South Aral, whose deep western side and shallow eastern side have separated into two distinct water bodies.

After the Soviet Union collapsed and Kazakhstan became independent in 1991, hope appeared for the North Aral’s recovery. The mayor of the town of Aralsk followed scientists’ advice and built a makeshift dam, isolating it from the South Aral. The dam collapsed several times, however, with reportedly two men killed, but during the years the dam stood, the North Aral rose slightly.

In 2005, the World Bank and the Kazakhstan government had designed and built a permanent eight-mile dam intended to raise the North Aral by approximately 4 metres, deep enough to drop salinity and allow native fish to repopulate the sea. The $85m project also improved irrigation structures upriver from the Aral.

The first phase of a World Bank restoration project concluded in 2008. Its total cost was $86m, including a $64.5m World Bank loan to the Kazakh government. The aim was to secure the northern Kazakh pocket of the Aral Sea at 42 metres above Baltic Sea level and improve ecological conditions in the area. The project includes construction of the Kok-Aral dike that separates the northern and southern seas, as well as several hydraulic structures on the Syr Darya river.

The World Bank is considering a follow-up project to improve environmental and economic conditions further – a scheme estimated to cost $300m. It includes returning water to the port of Aralsk and nearby villages, rehabilitating delta lakes and improving river flows.

One of the reasons for this proposal is due to the health problems local populations have had since sea levels have diminished, which the World Bank recognises.

Such investment in reconstructing the Aral Sea region is crucial, as it is among the poorest districts in the oil producing state. At least a quarter of its population lives below the poverty line, and the average monthly income is three times below that of Kazakh financial capital Almaty, according to official data. Average life expectancy is 66 years compared to 70 in Almaty.

Kazakhstan is expected to double its oil output and become one of the world’s top 10 oil-producing countries by 2020. Hydroelectricity from five plants make up 12% of its electricity generation, but because of its burgeoning fossil fuels industry, renewable energy development has been slow in the country.

Speaking at a high-profile energy forum earlier this month, Timur Kulibayev, head of Kazenergy, said “It’s very fashionable these days to talk about alternative energy. We would look for alternative energy once its cost of production becomes lower and feasible.”

This is worrying for the future of the Aral, as more harmful gases from neighbouring countries are pumped into its atmosphere. Only through clean or low-carbon energy will the sea’s ecosystems and bordering human populations enjoy a prosperous future, otherwise the Aral will forever be regarded as an example of mankind’s carelessness.