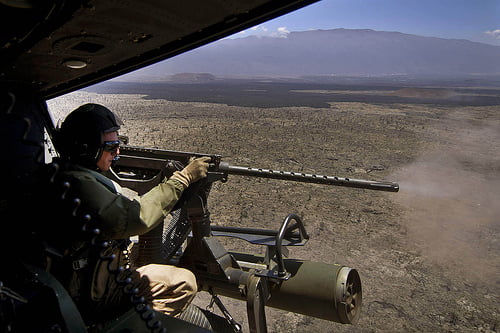 While none of the major gun manufacturers are British, thousands are killed every year by military equipment manufactured in, and sold by, the UK.

Ever since human’s earliest predecessors picked up something long and hard and clubbed someone over the head with it, there’s been profit in conflict.

Not a year has gone by since 1945 that hasn’t seen an armed conflict somewhere in the world. And armed conflicts need arms. Apologists for the arms industry use either the ‘economic benefit’ argument or the ‘weapon doesn’t kill someone, the person does’ argument.

The arms industry does create lots of skilled jobs and is a valuable export industry. The problem is that many of those exports go to regimes that kill, torture or maim their own citizens, engage in wars of aggression or commit acts of genocide. Sometimes they even use the weapons to kill our own soldiers; after all, we have the receipts. Weapons do kill people.

As the technology become more advanced, it becomes easier to kill lots of people remotely. Once you remove direct personal involvement from killing and reduce war to a remote control arcade game, sometimes supported by artificial intelligence, the weapon itself becomes the decision-maker rather than the tool.

Around 526,000 people die violently every year with 55,000 of them losing their lives in conflict. While we live in relatively peaceful times on a global scale, producing more weapons and selling to more countries means violence will rise.

This article first appeared in a feature about the sextet of sin. Read more about this subject here and here.